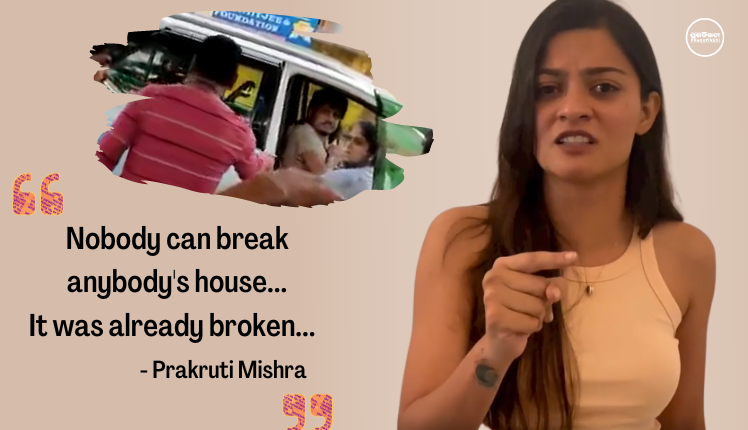 "Nobody can break anybody's house. It was already broken.", said actress Prakruti Mishra.

Bhubaneswar: After Ollywood Celebrities’ high drama which hit the street of Odisha capital on Saturday, Odia actress Prakruti Mishra, actor Babushaan Mohanty and his wife Tripti Satapathy have become the talk of the town.

Meanwhile, Prakruti Mishra, who remains most of the time in controversies, on Saturday shared a self-made video on Instagram, where she took her stand to prove her innocence in the ongoing controversy.

The actress’ video landed on Instagram a day after she was allegedly assaulted by co-actor Babushaan’s wife Tripti Satapathy in the Satyanagar area on Saturday morning.

“A woman assaulted and harassed a woman in public with the help of eight goons. The people who were present over there were making fun out of it. Nobody was trying to help me when she (Babushaan’s wife) was assaulting me. I remained silent at that time also but I am still strong despite what happened to me. I will make comeback from this and begin acting,” Mishra said.

“Nobody can break anybody’s house. It was already broken. If she (Babushaan’s wife) doesn’t want her husband to work with others going outside then it is better, she must chain him up at home as she feels insecure. I am not getting any outcome from yesterday’s incident as it hampered not only my image but also the image of yours (Babushaan’s wife). Her such behaviour is not acceptable to me,” she said.

“Now, whatever legal actions are there all have to be taken but I can proudly say that yesterday’s incident turned me into a real-life heroine from a reel-life heroine. I will shine brighter than always and will gather more pride for my state,” she added.

Actor Prakruti Mishra took to Instagram to share a statement on Sunday after a video of her getting assaulted in the streets of Bhubaneswar went viral on social media. Prakruti was allegedly assaulted by the wife of her co-star Babushaan Mohanty, who thinks the two actors are having an affair.

Babushaan also explained in a video, “All of you must be enjoying watching my viral videos. But, I want to tell you that I came to Chennai to participate in the Utkal Divas celebrations and Prakruti Mishra was also invited to the event. I came here to promote my film in which Prakruti is working opposite me, and we were also planning to announce the new film.”

“I was not aware that my family was going through disturbances. If my family has issues with this then I will not do that film with her. If required, I will not work with any heroines in the future,” the actor said in his video statement.

In the meanwhile, her mother Aparajita Mohanty said, “Babushaan is a good and talented kid and he loves his family. For him, Odia industry is everything.” Commenting on the ongoing row, Aparajita said, “Bad company has ruined my son’s life.”

ALSO READ: Babushaan Got Into Bad Company, Says Aparajita While Actor Tells “Will Not Work With Prakruti Mishra Or, If Need Be, Any Heroine”

“I don’t know what happened to him (Babushaan) during the Covid-19 pandemic for which he has got completely changed. He started behaving differently and didn’t even pay visit to us. It was during this period that he got into some bad company. I urge people to bless my son so that he returns to his family.”

Notably, Ollywood actor Prakruti Mishra’s mother Krushnapriya Mishra yesterday afternoon lodged a complaint alleging that some people assaulted her daughter while she was going for some work.

Later, Babushaan’s wife Tripti, accompanied by her mother-in-law Aparajita Mohanty lodged a counter-complaint against Prakruti Mishra accusing the actress of creating disturbances in her marital life by extracting personal information about her husband to get close to her.

Commissionerate Police has recorded the statements of seven persons including Babushaan’s mother Aparajita Mohanty, wife Tripti Satpathy, her father Lalit Satpathy, aunt and uncle Sangita and Ashok Praharaj, Prakruti Mishra’s father Manmath and mother Krushnapriya Mishra. Besides, Kharvel Nagar Police Police also served notices to actors Babushaan and Prakruti based on the complaint filed by Trupti Satpathy. As both the actors are out of the state, they have been asked to appear in person at the police station after their arrival in Bhubaneswar.