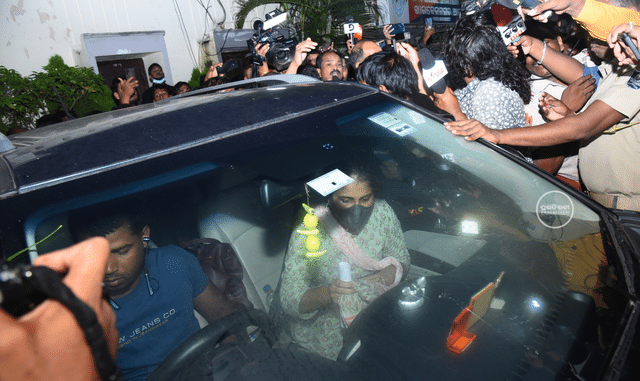 Bhubaneswar: The high drama that unfolded in the streets of Bhubaneswar this morning after Odia Actor Babushaan Mohanty’s wife was seen confronting actress Prakruti Mishra and accusing her of ruining their family, two separate complaints have been lodged with Kharvel Nagar police station in this regard.

Reportedly, Ollywood actor Prakruti Mishra’s mother Krushnapriya Mishra this afternoon lodged a complaint alleging that some people assaulted her daughter while she was going for some work.

Later, Babushaan’s wife Tripti, accompanied by her mother-in-law Aparajita Mohanty lodged a counter-complaint against Prakruti Mishra accusing the actress of creating disturbances in her marital life by extracting personal information about her husband to get close to her.

In her complaint, Tripti alleged that due to Prakruti’s bad influence, her husband was always in an intoxicated state and was neither coming to their house nor providing financial or moral support to her. She said that despite counselling with her husband Babushaan and actress Prakruti Mishra, including her parents but in vain.

Tripti stated that whenever the family members tried to distance Babushaan from Prakruti’s bad influence, the actress would threaten them with dire consequences.  She also accepted that she lost her cool after Prakruti interfered when she was confronting her husband and a scuffle broke out between them.  Further, she has urged the police department to probe the matter and take necessary actions as per law.

While it was raining incessantly in the State Capital since morning, some videos went viral purportedly showing actor Babushaan’s wife confronting her husband and actress Prakruti Mishra after finding them sitting inside a car in a secluded place in the Satya Nagar area.

In the viral video, actor Babusan’s wife can be seen assaulting Prakruti and chasing her for some distance on the road. Even in the video, Babusan’s wife is heard saying loudly that Prakriti is ruining her family.

After the videos made headlines, Prakruti’s father, singer and music director Manmath Mishra and mother Krushnapriya Mishra reached the Kharvel Nagar police station and lodged a complaint against Babushaan’s wife Trupti accusing her of defaming their daughter. He said Prakruti will also be filing a defamation case after she returns from Chennai from a film shooting.

On the other hand, actor Babusan opened up about the incident and said that he and Prakruti are very good friends since their childhood and their relationship is more professional.