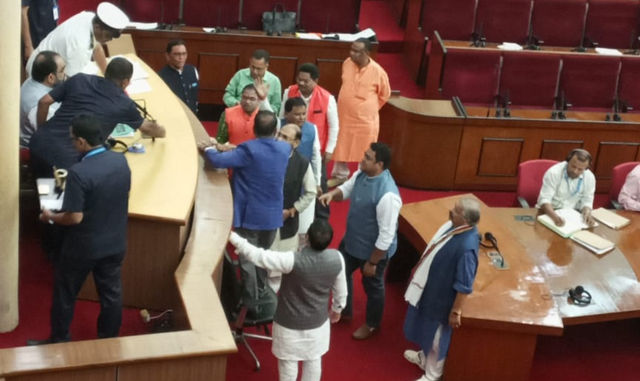 Bhubaneswar: The ongoing political slugfest over Padampur bypoll, farmers’ issue, and teachers’ protest, now the case of lady blackmailer Archana Nag has rocked the Odisha Assembly. On Monday, the opposition BJP and Congress cornered the BJD-ruled state government over the honeytrap network of the infamous Nag-Chand Couple.

An adjournment motion was moved by the BJP over the high-profile blackmailing issue, while Congress also lambasted the state government over the same. Both the BJP and Congress MLAs alleged that the police deliberately destroyed all the evidence to shield the bigwigs deeply involved in this case.

The opposition said, “Photos of some influential persons with the couple are circulating among people, but not even once did the police call them for questioning. Despite registering two cases, the police did not take the issue seriously.” They said the Chief Minister is still tight-lipped on the matter.

In response, Minister of State for Home Tusharkanti Behera said, “The allegations that the government is shielding criminals are baseless and untrue. The government has never protected criminals. Law is above all. The Chief Minister of Odisha has always given importance to abiding by the law. Criminals, no matter who they are or how influential they are, are bound by the law and action has been taken against such persons by the state government.

On the contrary, from the opposition, Chief Whip Mohan Charan Majhi, MLA K. Narayan Rao, Sanatan Bijuli, Congress Legislative party leader Narasingha Mishra, MLA Taraprasad Bhagarpati alleged that the ruling party leaders, ministers, MLAs, officers, contractors, and builders are all involved in the blackmailing racket. Photos of 64 people have been found from Archana’s email and efforts are being made to it wipe out, he added.