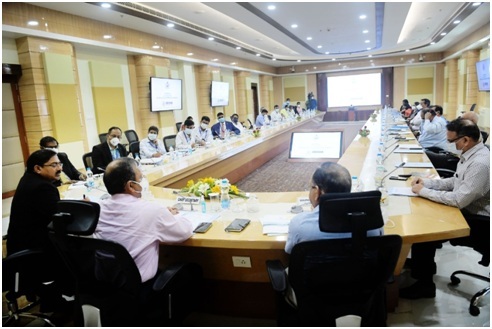 Bhubaneswar: Odisha is a lead State is cent percent utilidation of the Rural Infrastructure Development Funds (RIDF) said the NABARD Chairman Dr G.R. Chintala. He said this in an interactive session between Government of Odisha and NABARD held today under the Chairmanship of Chief Secretary Suresh Chandra Mahapatra at Lokseba Bhawan Convention hall wherein Development Commissioner Pradeep Kumar Jena outlined the issues for discussion.  Dr Chintala added, “State grew to a place of big industrial and business activities during the last decade”.

Chief Secretary Suresh Mahapatra said, “With pioneering initiatives and faster performances across the sectors, Odisha has emerged as a rapidly developing State within last two decades.  State has achieved highest poverty reduction of 24% in last decade resulting in liberation of around 8 million people from poverty net”. Sri Mahaptra added that State became No-1 in investment implementation rate as per ASSOCHAM-2017 report. Odisha is now one among the 3 top investment destinations in the country. Hundred percent of the villages have been electrified in last years. “We have become a lead State in rural roads, housing, farmers empowerment, women empowerment and skill development.  In post covid scenario, there is need for higher investment in rural roads, irrigation, agricultural development, social infrastructure, creation of new livelihood opportunities, agri-business etc”. Sri Mahapatra emphasized on enhancing the NABARD loan assistance to the State.

Development Commissioner PK Jena said , “Odisha’s engagement with NABARD was quite successful and encouraging in last the years. “More investment is needed for building disaster-resilient infrastructure in the State because of its unique geo-physical location which makes it prone to frequent disasters”. He added that along with RIDF, State also successfully implemented climate change action plan projects and agriculture development projects with NABARD. Strengthening of flood and saline embankments would insure the agriculture and allied sector against nature’s fury and would boost the sector to the next higher level.

The principal Secretaries and Secretaries of the departments of Agriculture and Farmers’ Empowerment, Finance, Handloom and textiles and Handicraft, Mission Shakti Fisheries and animal resource development, Food supplies and consumer welfare, and, Cooperation  laid out the possible areas and projects in which NABARD and State could operate together in more effective manner. 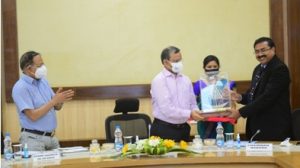 Principal Secretary Finance Vishal Kumar Dev highlighted the low CD ratio and credit flow from the banks to rural sector. He emphasized the need for covering all unbanked GPs either through brick and mortar branches or banking correspondent agents (BCAs). He added, “out of 6798 GPs only one third GPs have bank branches and 1500 SHG members are operating as BCAs. He highlighted the need for more NABARD assistance in financial inclusion.

In his response,  Dr. Chintala said, “As the State has a strongly motivated administrative machinery and robust mechanism for project implementation, NABARD will do the best in enhancing its involvement with the State”. Available data showed because of the faster implementation of the projects, NABARD enhanced its RIDF loan from around Rs.2500 cr in 2016-17 to Rs.3000 cr in current financial year.”