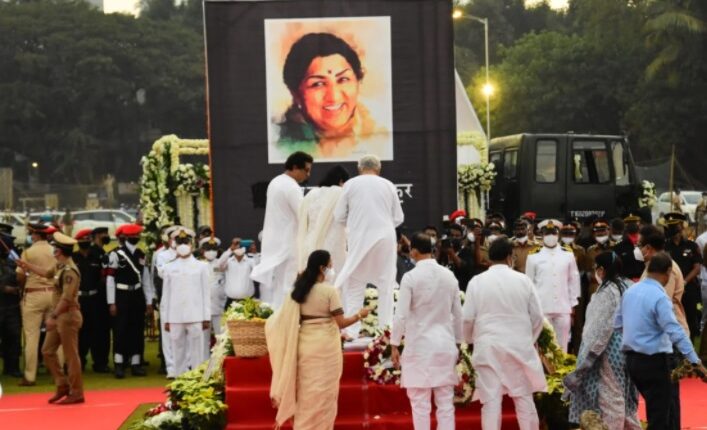 Mumbai: The mortal remains of music legend Lata Mangeshkar was consigned to flames with full state honours at Mumbai’s iconic Shivaji Park on Sunday evening. A sea of fans joined the legendary singer’s final journey from her Peddar Road residence to Shivaji Park

Just before the last rites, the national flag in which the body was draped, was handed over to the family members. Lata Mangeshkar’s brother Hridaynath Mangeshkar lit the funeral pyre of the singing legend.

Popularly known as the ‘Nightingale of India, Lata Mangeshkar had sung over 50,000 songs in different languages since her debut in 1942.

The central government has announced a two-day “state mourning” on the death of the legendary singer. The national flag will fly at half mast from February 6 to February 7 throughout India and there will be no official entertainment in this period.

The legendary singer of the Indian film industry, Lata Mangeshkar has passed away in the wee hours of Sunday. The Bharat Ratna recipient was admitted to Breach Candy Hospital’s intensive care unit (ICU) on January 8 after the crooner was tested positive for COVID-19.