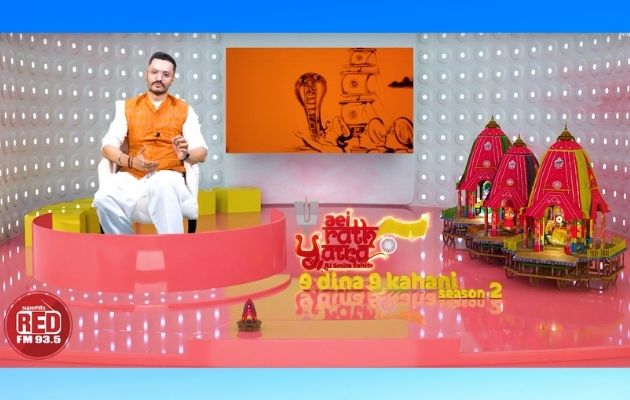 Bhubaneswar: Lord Jagannath’s Rath Yatra, the centuries-old chariot procession is not only a religious ritual but also showcases how the Jagannath consciousness has long enriched the cultural heritage of Odisha.

The Jagannath cult is believed to be thousands of years old and has evolved over the years. There have been several untold stories associated with the Lord, which signifies the direct relation of God-Devotee.

To mark the nine-day-long annual sojourn of the Holy Trinity, 93.5 Red FM has started Season 2 of ‘9 Dina 9 Kahani’, where the people will come to know about nine stories that are centered around Lord Jagannath.

Sadhabas–the ancient mariners of the Kalinga region, used to travel to distant places to carry out trades. Once during their long voyage, Sadhabas saw a small island named– Mani Dweepa. The island was covered with Gem-headed Cobras and they sawa there was a bright spark of light inthe island that wa clearly visible in the night.

Driven by greed, some Sadhabas went to the island to fetch the gemstones. However, they died after being bitten by venomous serpents.

A clever sailor, who was aboard the ship, figured out that it was difficult to acquire the stones at night at waited till dawn by marking the landmark. The next morning he quietly entered the island and managed to fetch the gemstone. He then quickly left the island and started to sail.

Soon, the sailors saw a gigantic serpent raging towards them. With no options left, they started praying to Lord Jagannath to save their lives. In the meanwhile, a devine force helped them escape the giant snake.

It is believed Lord Jagannath, who always listens to his devotees at all times and has always protected them from all evil, saved the Sadhabas.

After reaching home safe and unharmed, the Sadhabas presented the Lord with the rare serpent gem which has since then adorned his head during every Rath Yatra and has kept his abode illuminated at all times.