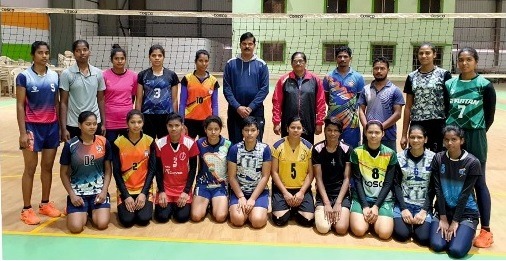 Bhubaneswar: The 69th Senior National Volleyball (Men & Women) Championship 2020-21 is all set to be held under the aegis of Volleyball Federation of India (VFI) at  Biju Patnaik Indoor Stadium, KIIT Deemed to be University from 05th – 11th March 2021.

For the first time in the history of Indian volleyball, Odisha will be hosting the senior national championship consecutively after successfully conducting the 68th Senior National Volleyball (M&W) Championship last year.

Also for the first time all the matches would be played in Indoor courts with live streaming.

The Championship will feature more than 1200 Men & Women volleyball players from 28 states and 8 union territories. For the first time the union territory Ladakh team have been participating with proper permission from President, VFI.

The Indian Volleyball team for the upcoming Asian Championship and other international meets would be selected through this championship.

The championship would be conducted as per COVID guidelines of Govt. of Odisha. The Inaugural Ceremony will be held at Biju Patnaik Indoor Stadium, KIIT-DU on 05th March on the birth anniversary of legendary Late Shri Biju Patnaik, Former Chief Minister of Odisha.