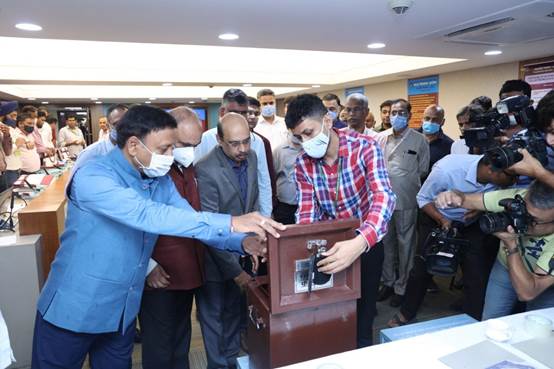 New Delhi: The Election Commission of India (ECI) on Tuesday started the distribution and dispatch of designated ballot boxes, ballot papers, special pens and other sealed election materials to the State Legislative Assembly Secretariats including in the National Capital Territory of Delhi and UT of Puducherry for the conduct of Presidential Election 2022 scheduled on July 18.

Interestingly, an air ticket has been booked in the name of “Mr Ballot Box” to meet the timelines for presidential elections. Mr Ballot box has a prominent role in the process of Presidential elections. It is no ordinary box as it is to hold the fate of the highest office of the largest democracy on the planet.

Thus the mandated procedure specifies special caution during the transportation, storage, and use of these boxes. Particularly for the conduct of Presidential elections, the process also involves the fascinating journey of Ballot Box reaching every state capital. During the transportation, the ballot boxes fly on a separate air ticket booked in the name of Mr Ballot Box seated in the front row of aircraft besides the seat of the officer transporting the materials under personal supervision.

ECI has started sending Ballot boxes, ballot papers and other materials to states today and by 14 July it would be sent to all 30 States/UTs and Parliament. Today Ballot boxes were handed over to Assistant Returning Officers (AROs) including one senior officer from the office of Chief Electoral Officer (CEO) of Karnataka, Andhra Pradesh, Punjab and Andhra Pradesh.

The AROs will return to their respective States/UTs on the same day as the collection of election materials. During the transportation, the ballot boxes fly on a separate air ticket in the front row of the aircraft beside the seat of the officer transporting the materials under personal supervision.

NN Butolia, Senior Principal Secretary told that once the ballot boxes reach the state capitals these are stored in previously sanitised and properly sealed strongrooms under strict videography monitoring. Once the poll is over on July 18, the polled and sealed ballot boxes have to be transported back to Rajya Sabha Secretariat by the next available flight.

The boxes and other documents are carried personally in the aircraft cabins, never out of sight of accompanying officers. ECU has also appointed 37 observers for overseeing the arrangements of polling and counting during elections and a briefing meeting of these observers was also organised on July 11, 2022.

(Except for the headline, this story has not been edited by our staff and is published from a syndicated feed.)