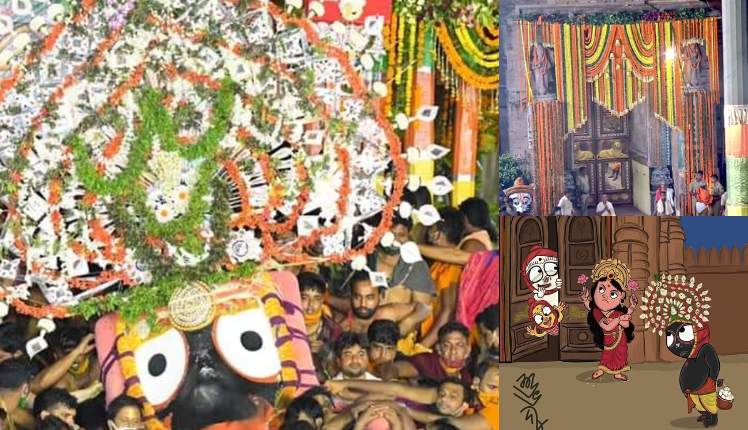 The Siblings Deities were ushered to the sanctum sanctorum in ‘Goti Pahandi’ during the Niladri Bije ritual. Lord Rama, Krishna & Madanmohan were first taken inside Srimandir in ‘Pahandi’ followed by the Pahandi of Lord Sudarshan.

Subsequently, Lord Balabhadra and Devi Subhadra were carried into the sanctum sanctorum of the Srimandir by the fervent servitors amidst a massive crowd of devotees witnessing the deities’ return to the temple.

Following this, Lord Jagannath was escorted to ‘Bheta Mandap’ in the ceremonial Pahandi where He met Goddess Laxmi and offered Rasagolas to her.

Lord Jagannath and Goddess Mahalaxmi’s meeting ritual was carried out on the Charamala following which the Bachanika ritual was conducted at the Jay-Vijay Dwar.

Before entering the main temple, a traditional ritual between the servitors of Lord Jagannath and Mahalaxmi was held at the main gate also known as ‘Jaya Vijaya Dwar’ of the temple.

Mahalaxmi, the consort of Lord Jagannath, was angry as she was left in the main temple and was not a part of the trip to the Gundicha temple.She closes the temple gate on the face of Lord Jagannath and only allows Lord Balabhadra, Goddess Subhadra, and Lord Sudarshana into the temple.

To cajole Mahalaxmi and to gain access to the temple, Lord Jagannath offers new clothes and Rasagolla (sweet) and requests her to forgive him. After a long conversation, Mahalakshmi finally gets convinced and opens the temple gate and allows Lord Jagannath inside.

The reconciliation of the Divine couple happens on a sweet note. After that, Jagannath is made to sit beside Mahalakshmi where a ritual of reunion is rehearsed and finally Lord Jagannath ascends the Ratna Singhasana and re-joins his brother Balabhadra and sister Subhadra.