California: A stellar nursery where stars are born, interactions between galaxies and a unique view of an exoplanet are just some of the new cosmic images were shared Tuesday.

After decades of waiting, it’s finally time for the world to see the first images taken by the most powerful space telescope ever — the James Webb Space Telescope.

The image, released by Nasa and the European Space Agency on Tuesday, the shows hundreds of previously hidden stars and numerous undiscovered background galaxies, as well as strange, ghost-like protrusions emerging from the dust cloud that are baffling scientists.

In the first release of data, Nasa and the European Space Agency also announced that the telescope had detected water in the atmosphere of an exoplanet called Wasp-96b, which lies around 1,000 light years away from Earth.

The hot, puffy planet shows evidence of clouds and haze, which previous studies could not spot.

A planetary nebula known as the Southern Ring, which lies around 2,000 light years from Earth, was also captured in astonishing detail, cloaked in dust, as well as a group of “dancing” galaxies described as Stephan’s Quintet. 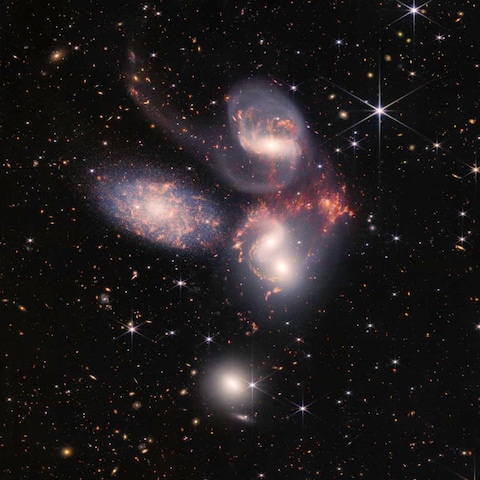 Further afield, a galaxy lying 13.1 billion light years away was found to contain oxygen, showing that crucial elements for life were already in place just a few hundred million years after the birth of the universe.

The new release of images marks the furthest anyone has ever peered back into the past and is only possible because of the array of cutting-edge instruments on the James Webb Space Telescope, which can detect the faintest infra-red light in the furthest reaches of space.

“It’s like the Moon landing for astronomy,” said Gunther Hasinger, the director of science at the European Space Agency. “This is the start of a new era viewing the universe.”

The new images are possible because the telescope contains instruments that can capture light in the infra-red spectrum.

Because the universe is expanding, light emitted by far-away objects gets stretched, increasing in wavelength and growing ever redder before finally reaching the infra-red spectrum, where it can no longer be seen by the human eye.

It is known as cosmological redshift and is similar to the Doppler effect, in which sounds change as they move further away.

To detect such faint red light, the telescope has 18 hexagonal mirror segments, each 4.3ft (1.3 metres) in width, which feed even the dimmest rays into four infra-red instruments. 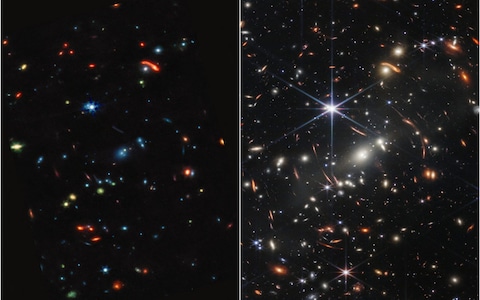 Composites made from images at mid-infrared (left) and near-infrared CREDIT: Nasa

Bill Nelson, a Nasa administrator, said the team planned to look even further into the past, to when the lights were first turned on in the universe.

“We will look back to 13.5 billion years ago, only a few hundred million years after the beginning,” he said. “That is the threshold that we are crossing.

“Every image is a new discovery, and each will give humanity a view of the universe we have never seen before.

“This telescope is going to be able to penetrate through the dust clouds and see light from faraway corners of the universe.”

Named after a former Nasa boss who oversaw the Apollo programme in the 1960s, the £8.5 billion James Webb Space Telescope has taken 30 years to get off the ground. 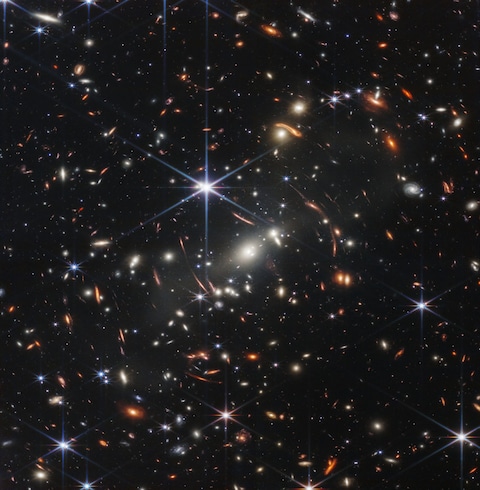