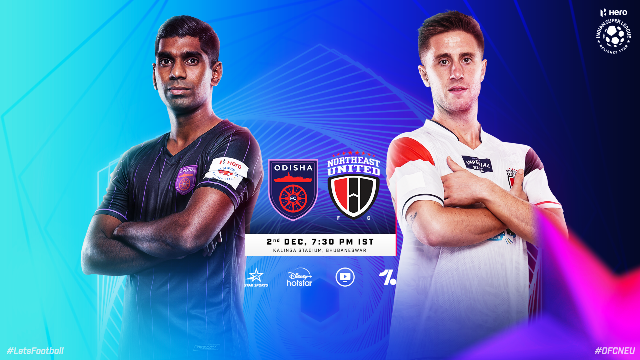 Bhubaneswar: With five wins in seven games, third-placed Odisha FC have a chance to leapfrog Hyderabad FC and go level on points with league-leaders Mumbai City FC on Friday as they host a struggling NorthEast United FC, who have no points from seven games in the Hero Indian Super League (ISL) this season.

Odisha FC have been irrepressible in the last two games emerging as the comeback masters. The Juggernauts left it late against Chennaiyin FC as they snatched all three points with a 95th-minute winner. In the game before that, they came from two goals down to win 4-2 against East Bengal FC. Now, Josep Gombau’s men aim to win three games on the trot for the first time this season.

The Juggernauts are currently the only Hero ISL team to have a perfect home record, having won all three games.

Odisha FC star striker Diego Mauricio was benched in the last game but came on in the second half, scored from the spot, and ended his five-game goal drought, boosting the team’s confidence even further.

“We will approach this game as we approach every other game. We have got a lot of respect for NorthEast. In the last two games, they faced two strong opponents, and in certain moments, especially against ATK, they were drawing until the last moment,” said Gombau.

“That is something we have in mind. Every single game in this league is difficult. Out of respect for them, we will prepare for this game the same way we prepare for other games”, he added.

NorthEast United FC find themselves trapped with their worst ever start to a season. They are yet to get off the mark after losing all seven games, and have scored only thrice in that time. That is the lowest tally in the league at the moment, alongside the fact that they have conceded 16 goals, which is the most by any team.

“The staff is good and they help me a lot. The players are highly motivated in training and are working very hard. I cannot complain about the effort on the pitch because in every game they fight till the end,” said Balbul. “It’s not easy to keep going and stay motivated with these results. But we believe we can change things on the pitch. We will keep going and fight in every game until we change the situation,” he added.

In the last meeting between these teams earlier this year in the Durand Cup, NorthEast United FC were beaten 6-0 by Odisha FC. In the Hero ISL, the two sides have faced each other six times. The Juggernauts have won thrice, while NorthEast United have nabbed two wins, and one game has ended in a draw.