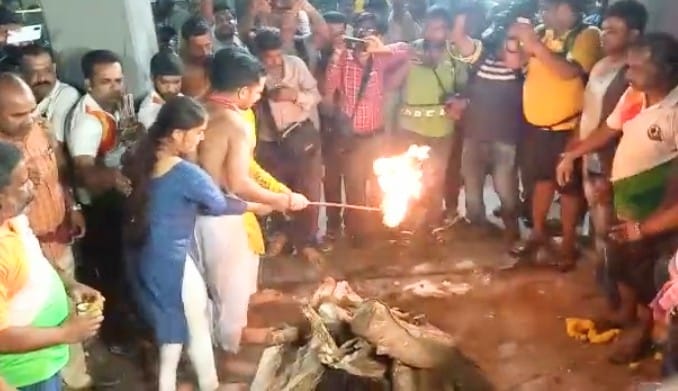 Puri: The mortal remains of the legendary actor Raimohan Parida were consigned to flames at Swargadwara crematorium in Puri today with the entire Ollywood fraternity and scores of fans bidding a tearful adieu to the iconic villain of the Odia film industry.

As per reports, Parida’s younger daughter lit the funeral pyre during the cremation. The actor is survived by two daughters and his wife.

Raimohan Parida was found hanging in his residence at Prachi Vihar near Palasuni in Bhubaneswar on Friday. Later his body was taken to Capital Hospital for post-mortem. There the actor’s family members donated his eyes.

A text message, that the actor sent to his family members before taking the extreme step,  has now surfaced. The message was purportedly sent by the deceased actor to his wife and two daughters and it is being said to be his last message prior to his death.

As per Mancheswar police, Raimohan had texted ‘bye’ along with the names of his two daughters. He had also sent ‘bye’ message from his mobile phone to his wife.

A pal of gloom descended over the native village, Saharapada in Keonjhar district following the tragic death of the veteran Odia actor, who was supposed to inaugurate Maa Mangala temple today.