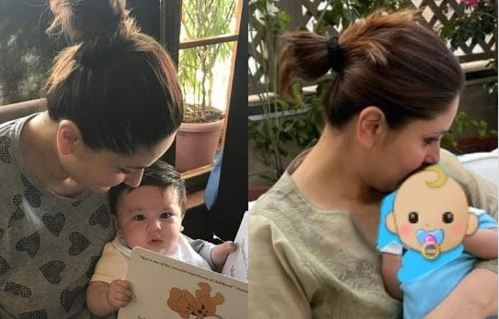 Mumbai: While Kareena Kapoor Khan and Saif Ali Khan had remained tight-lipped about their secondborn’s identity for the longest time. Last month, Randhir Kapoor had revealed that his grandson has been named Jeh. However, according to Kareena Kapoor’s recently published book, Pregnancy Bible, there was more to the story as the real name is revealed now.

As per reports, Kareena Kapoor indirectly revealed her second baby’s original name in her recently published book Pregnancy Bible: The Ultimate Manual for Moms-To-Be. She has addressed her second son Jeh throughout the book, called him Jehangir in the caption of one of the images of her book.

Kareena and Saif are yet to give any confirmation on the name. Earlier, the duo also faced backlash after naming their firstborn, Taimur Ai Khan. The name proved to be ‘objectionable’ for some. People questioned their decision to name their son after a Turkish emperor who invaded India by recklessly plundering the country.

Meaning of Jeh
Jeh in Latin means blue crested bird and in Parsi, it means ‘to come, to bring’.

While the name has been revealed, fans are now waiting for the couple to share his complete photo.

On the other hand, on July 9, 2021, Kareena surprised everyone when she launched her “pregnancy bible.” The book “Kareena Kapoor Khan’s pregnancy bible” will take you through the actress’ experience of her two pregnancies and how she dealt with them and what all hurdles she faced and how she overcame them.