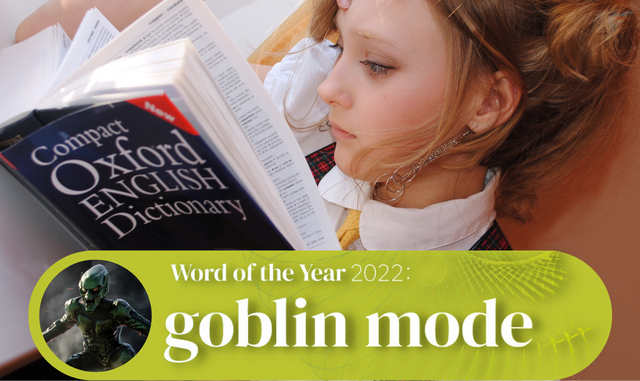 ‘Goblin mode’ has been overwhelmingly chosen as the Oxford Word of the Year 2022 after a public vote on Monday. ‘Goblin mode’ – a slang term, often used in the expressions ‘in goblin mode’ or ‘to go goblin mode’ – is ‘a type of behaviour which is unapologetically self-indulgent, lazy, slovenly, or greedy, typically in a way that rejects social norms or expectations.’

Although first seen on Twitter in 2009, goblin mode went viral on social media in February 2022, quickly making its way into newspapers and magazines after being tweeted in a mocked-up headline. The term then rose in popularity over the months following as Covid lockdown restrictions eased in many countries and people ventured out of their homes more regularly. Seemingly, it captured the prevailing mood of individuals who rejected the idea of returning to ‘normal life’, or rebelled against the increasingly unattainable aesthetic standards and unsustainable lifestyles exhibited on social media.

The ‘goblin community’ has spoken!

We’re pleased to announce goblin mode as the #OxfordWOTY 2022.

The Oxford Corpus lists many vivid examples of goblin mode, including “Goblin mode is like when you wake up at 2am and shuffle into the kitchen wearing nothing but a long t-shirt to make a weird snack, like melted cheese on saltines”, as quoted in The Guardian newspaper. More recently, an opinion piece in The Times stated that “too many of us… have gone ‘goblin mode’ in response to a difficult year.”

Speaking at a special event to announce this year’s approach to selecting the Oxford Word of the Year, Ben Zimmer, American linguist and lexicographer, said: “Goblin Mode really does speak to the times and the zeitgeist, and it is certainly a 2022 expression. People are looking at social norms in new ways. It gives people the license to ditch social norms and embrace new ones.”

Since the launch of the people’s choice vote, ‘goblin mode’ has captured the attention of many communities online, having been a runaway favourite on social media and within online publications, such as PC Gamer, which urged followers to “put aside [their] petty differences and vote for ‘goblin mode’.”

Casper Grathwohl, President, Oxford Languages, says: “We were hoping the public would enjoy being brought into the process, but this level of engagement with the campaign caught us totally by surprise. The strength of the response highlights how important our vocabulary is to understanding who we are and processing what’s happening to the world around us. Given the year we’ve just experienced, ‘Goblin mode’ resonates with all of us who are feeling a little overwhelmed at this point. It’s a relief to acknowledge that we’re not always the idealized, curated selves that we’re encouraged to present on our Instagram and TikTok feeds. This has been demonstrated by the dramatic rise of platforms like BeReal where users share images of their unedited selves, often capturing self-indulgent moments in goblin mode. People are embracing their inner goblin, and voters choosing ‘goblin mode’ as the Word of the Year tells us the concept is likely here to stay.”

The Oxford Word of the Year is a word or expression reflecting the ethos, mood, or preoccupations of the past twelve months, one that has potential as a term of lasting cultural significance. Supported by evidence of real language usage, Oxford’s editors track candidates as they emerge throughout the year, analyzing frequency statistics and other language data in the Oxford English Corpus. Previous words have included vax (2021), climate emergency (2019), and selfie (2013). After opening the choice of Word of the Year up to English speakers for the first time in its history, over the last two weeks more than 300,000 people cast their vote.