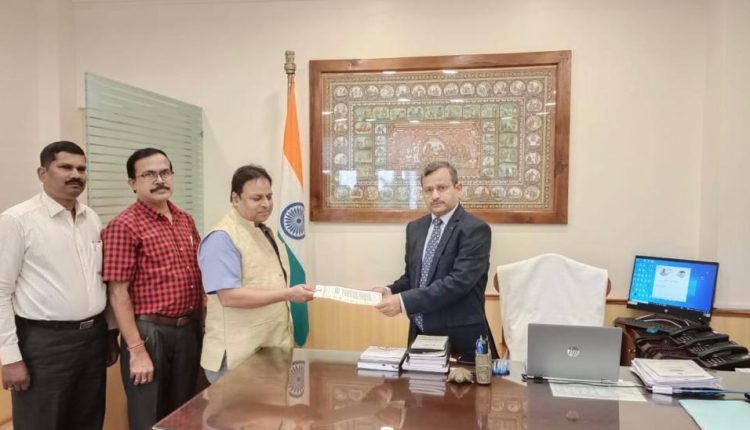 Through the memorandum, the Association apprised Chief Secretary Suresh Mahapatra about the recent incidents of attack and manhandling of OFS officers and other officers of the CT & GST wing of the State at Padmapur and Paikamal of Bargarh District.

Based on intelligence information and with due permission from the competent authority, Officers from State CT & GST wing were conducting inspections at different business establishments. While discharging their duties under provision enshrined in law, untoward incidents were witnessed at two places namely at Padmapur and Paikmal of Bargarh District. OFS officers were attacked by the miscreants. Even the lady officers were not spared and were misbehaved by them, it read.

Similarly, another team led by Suranjan Sagar, CT & GST officer, Sambalpur Unit visited Jagadamba Cloth Store, Padmapur (Proprietor- Sunil Kumar Agrawal) on 28. 1L2022. During the inspection around 500 people gathered in the spot and verbally abused the officials and prohibited them from discharging duty’ FIR has been lodged at Padmapur Police Station vide FIR No 3005 Dated 28.11.2022.

Odisha Finance Service Association (OFSA) strongly condemned the barbaric activities of miscreants who have manhandled and assaulted Government employees more particularly OFS officers on duty. Collection of GST and VAT constitutes 10% of the total tax revenue of the state and the OFS officers play a vital role in the tax administration. Such incidents will demoralize the field functionaries and will affect the State’s revenue.

The OFS Association has demanded stringent action against the miscreants for preventing Government Officers to discharge their duty. They have also requested for providing safety and security to Government officials while discharging duty.

BJP is trying to deceive the Women SHGs of Padampur and Odisha: BJD’s Sasmit Patra