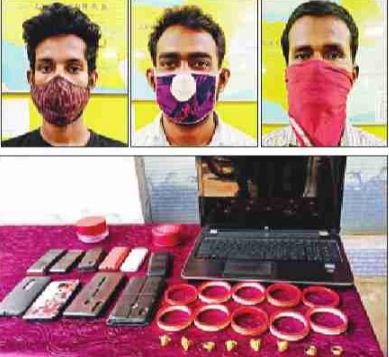 Cuttack: Jagatpur police claimed to have busted a looters’ gang and arrested three persons in this connection.

The arrestees have been identified as Karunakar Barik (38) from Kisan Nagar area, Rakesh Kumar Das (28) from Salepur, and Jayant Kumar rout from Jagatsinghpur.

Reportedly, the matter came to the fore after one Ramesh Chandra Samal of Jagatpur area lodged a complaint at the local police station regarding theft in his house on February 15.

Acting on the FIR, police registered a case and launched a probe in this regard. On the basis of the CCTV footage, the cops identified an SUV and arrested Rakesh. During interrogation, Rakesh confessed to his crimes and divulged information about his gang members.

Following this, the cops conducted raids at several places and managed to nab Karunakar and Jayant. However, the main accused, Kanhu Behere and Madhav Bhoi, are reportedly absconding.

A case was registered and a manhunt has been launched to nab the absconding accused.