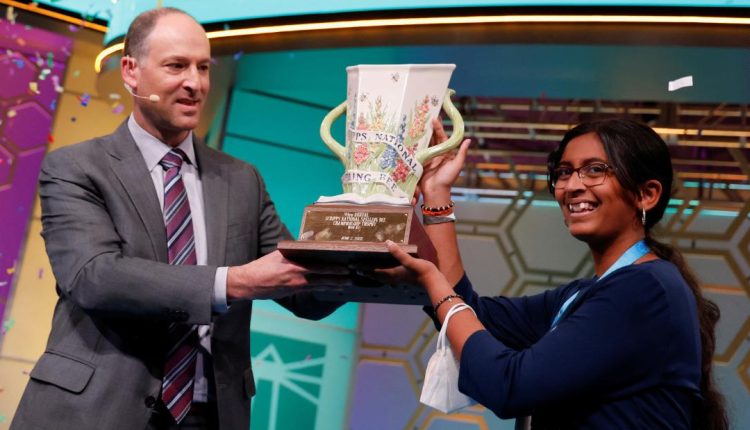 The final two competitors, Vikram Raju and Harini Logan, had trouble deciphering their words between Round 13 and 18. At that point, judges opted to institute the first spell-off – 90 seconds to spell as many words as possible correctly. The winner would win the Bee.

Harini Logan won the Scripps National Spelling Bee on Thursday night, claiming victory in a blistering, first-of-its-kind spell-off that capped a marathon duel of one arcane term after another.

Harini, 14, an eighth grader from San Antonio, beat Vikram Raju, 12, a seventh grader from Denver, after she rattled off word after word in a 90-second speed round. She spelled 21 words correctly in that time, compared with 15 for Vikram.

Harini managed to spell through more words than more than 230 other competitors at the national level, including 12 other finalists. Words in the final rounds included scyllarian, pyrrolidone, Otukian and Senijextee, reflecting how, over nearly a century of national spelling bees, the words have become increasingly esoteric.

But students have kept pace with terms out of botany, medicine, folk art and other specialist realms, so much so that, in 2019, eight students were crowned co-champions together. In turn, contest organizers have created new rules in recent years, including a component to test word meaning and the spell-off, a potential “lightning” tiebreaker round.

This year’s host was LeVar Burton. The Emmy and Grammy-award winner hosted the semifinal and the final round of the event.