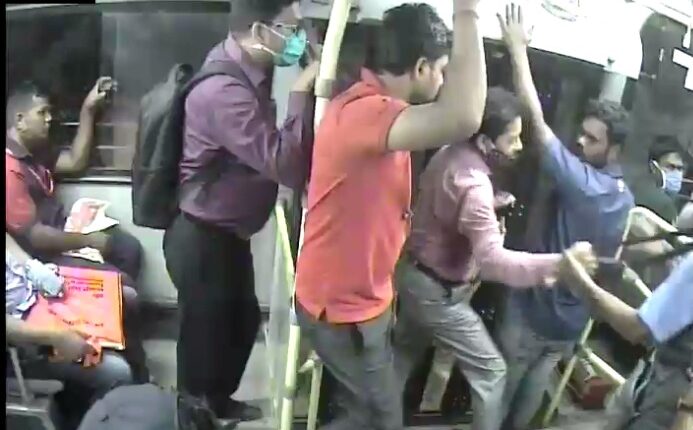 Bhubaneswar: The Capital Region Urban Transport (CRUT) on Wednesday clarified that the incident in which a MoBus rider was injured, an unusual and rare happening in the last two years.

Taking serious note of the incident relating to the injury of one its rider yesterday evening, CRUT has ordered an enquiry. Meanwhile, the concerned CRUT staff has been taken off the duty till completion of enquiry and suitable action there on.

In a press statement, the company has said that it values each of its customers and make all possible arrangement for their safe, secure and comfortable ride. Yesterday’s incident was an unusual and rare happening in the last two years of MoBus operations.

Further, the passenger was destined to get down at Hanspal. The bus duly stopped at Hanspal bus stop and a lady commuter got into the bus. However, the concerned passenger continued to argue with the Guide and did not get down at his stop. As he was standing very close to the door keeping his back towards it, when the automatic door closed he got stuck in the gate. In this situation, the passenger tried to force open it and can be seen banging the door. It appears that somebody pressed the emergency button to help the passenger but he fell down causing alleged injury to him.

CRUT has already approached few of co-passengers to record their statement in order to come to right conclusion. It is assured that if any of the staff of CRUT is found guilty, suitable and severe action will be taken.

CRUT reiterates that from the very beginning we have a customer-friendly approach. Shri Arun Bothra, Managing Director of CRUT said, “For us customer’s satisfaction and safety is priority. We go extra mile to ensure the same. There is no compromise in this regard. CRUT will continue to serve people of Capital Region in the best possible way.”

Man Hacks Brother To Death Over Land Dispute In Bolangir