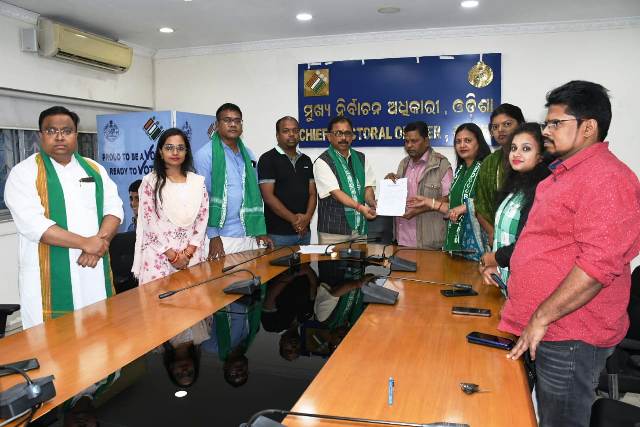 Bhubaneswar: The Biju Janata Dal (BJD) has alleged that the leaders and workers of the Bharatiya Janata Party (BJP) are distributing cash to woo voters in favour of the saffron party candidate Pradip Purohit in the poll-bound Padampur.

A delegation of the BJD today met the Chief Electoral Officer Sushil Kumar Lohani urging for strict and immediate action against BJP leader Rajesh Kumar Sahu and worker Tapan Suna for distributing money in a bid to influence voters in Padampur.

The BJD claimed that they have a photo of a Rs 1 lakh cheque given to villagers in Barikel GP of Padamapur by BJP leader Rajesh Kumar Sahu. The conch party also alleged that Sahu has been distributing money to voters through digital payment apps. They also apprised the CEO that Sahu is the owner of a gas agency in Padampur which was recently raided for GST irregularities.

Apart from him, BJP worker Tapan Suna has also been distributing money to voters in Munikel Village, Jhitiki Panchayat, Paikarnal Block of Padampur and has been caught on camera, the BJD added.