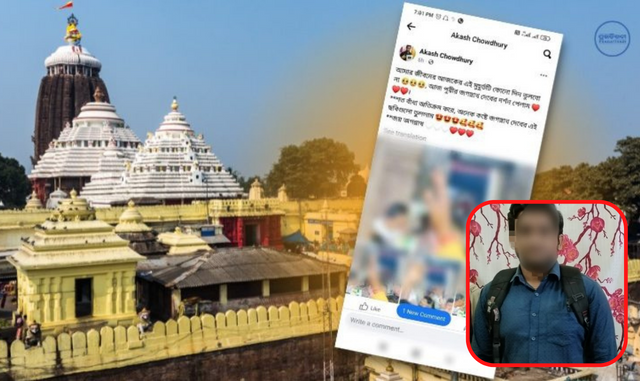 Puri: A youth from Bangladesh has been arrested by Puri Singhadwara police for taking pictures of the Srimandir’s sanctum sanctorum viral on social media.

The arrested youth, Akash Chowdhury (23) is a resident of East Zinda Bazar in Sylhet District of Bangladesh. A mobile phone and his passport have also been seized from his possession.

While having darshan of the Holy Trinity at the Shree Jagannath Temple recently, Akash took a few pictures of the sanctum sanctorum of the 12th-century shrine and posted those on social media.

After the photos went viral, the Shree Jagannath Temple Administration (SJTA) lodged a complaint with the Singhadwar police station. SJTA administrator (Security) VS Chandrasekhar Rao had filed the complaint seeking strict action against the devotee who clicked the photo inside the Jagamohan of the 12th-century shrine.

Akash had posted the photos on his Facebook account with some write-ups in Bengali. The picture was clicked during the Abakash ritual at Jagamohan.

Akashwhile posting the photo on FB wrote “this moment of my life is unforgettable. I have had the darshan of Lord Jagannath,” he wrote. Soon after the news spread, he reportedly deleted the post from his account.

While photography of any kind inside the temple is strictly prohibited, the incident pointed finger at the security system in the age-old shrine.

It is worth mentioning that the Shree Jagannath Temple Administration (SJTA) has banned the use of mobile phones, cameras and other electronic gadgets on the temple premises on security grounds. Signage has also been placed near Singhdwar for public awareness. Moreover, the security personnel also examine devotees before their entry into the shrine.

Recently, the temple administration also barred the use of mobile phones by police personnel and security men while on the Shree Jagannath temple duty. Home guards, OSAP jawans and other security personnel have been asked to refrain from using mobile phones while on duty at the 12th-century shrine. However, senior officers have been allowed to take mobile phones.