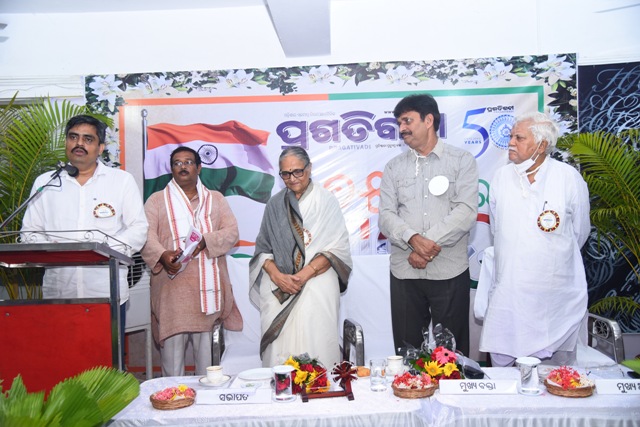 Bhubaneswar: As India celebrates the 75th year of the country’s independence, that is, Azadi Ka Amrit Mahotsav, leading Odia Daily ‘Pragativadi’ and Gandhi Peace Foundation’s jointly started the week-long programme, which entered into its second day on Tuesday. 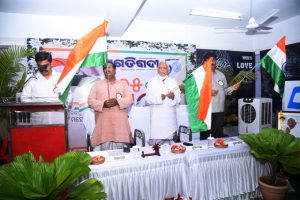 Like the inaugural day, the Day 2 event started with the hoisting of the national flag and singing of a patriotic song (Bande Mataram) by the guests and staff of Pragativadi. Chairpersons of Pragativadi, Smt Saswati Bal was also present on the occasion.

The evening programme was graced by of State School and Mass Education Minister, Samir Ranjan Dash as the Chief Guest.

Keeping its vital tradition, Pragativadi felicitated one of its prominent group D staff, Madan Naik on this occasion. He was felicitated with a Khadi garland for his tireless work towards the organisation. 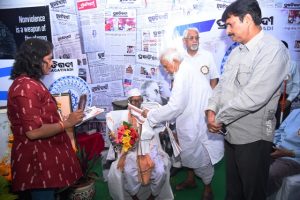 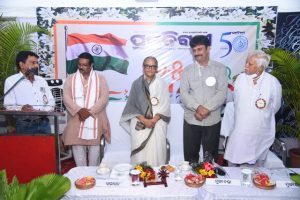 Today’s seminar topic was: Political situation after 75 years of independence

Presiding over the meeting, Dr Biswajit Ray introduced the guests and highlighted the efforts of freedom fighters and the role of constitution makers. He said: 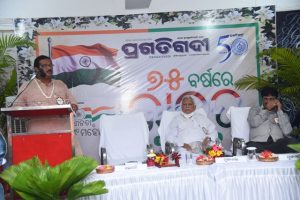 Mahatma Gandhi appears to be a paradox. On the one hand, he is regarded as a traditionalist whose ideas appear irrelevant in the context of modern society. On the other hand, some people regard him as a post-modernist who gave a critique of modern civilization and provided solutions to its problems. His booklet Hind Swaraj, published in 1909 apparently seems to be a defence of traditional Indian values.

If all movements that have been influenced by Gandhian ideals were to be listed it would read like a rollcall of the great moralists of the twentieth century and of its crusades. 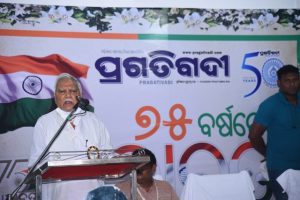 Today is the day of August Kranti. Speaking on this occasion, first of all, I would like to tell you that when Pragativadi rolled out for its journey fifty years back. I was the first subscriber and hawker of the daily newspaper. I could remember those days when I was distributing the newspaper near Cuttack’s College Square area. And I’m happy that I am still a part of the Pragativadi family. Shri Pradyumna Bal and Smt Saswati Bal had a historical vision and that vision is still being reflected on the pages of Pragativadi.

Gandhi’s ideas and principles are now all over the world. Towards the end of the freedom struggle, Mahatma Gandhi was contemplating the transformation of Congress into an organisation for social rebuilding. Gandhi visualised the evils of over-centralisation and modern industrial culture and as a corrective suggested return to village life. 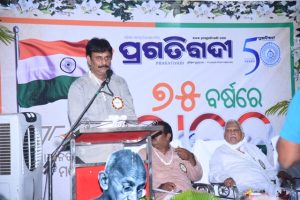 The story of India’s successful non-violent struggle has inspired many thoughts and movements across the globe, and it is one achievement that every Indian should feel proud of it. Independence was a very difficult task to achieve.

To get it, under the leadership of the father of the nation, Mahatma Gandhi, many sacrifices were made. Today, when we are celebrating 75 years of Azadi Ka Amrit Mahoshav, its history is being written in a different way. 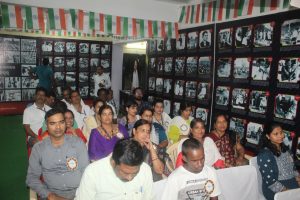 Azadi Ka Amrit Mahotsav is an initiative of the Government of India to celebrate and commemorate 75 years of independence and the glorious history of its people, culture and achievements.

This Mahotsav is dedicated to the people of India who have not only been instrumental in bringing India thus far in its evolutionary journey but also hold within them the power and potential to enable Prime Minister Narendra Modi’s vision of activating India 2.0, fuelled by the spirit of Aatmanirbhar Bharat.