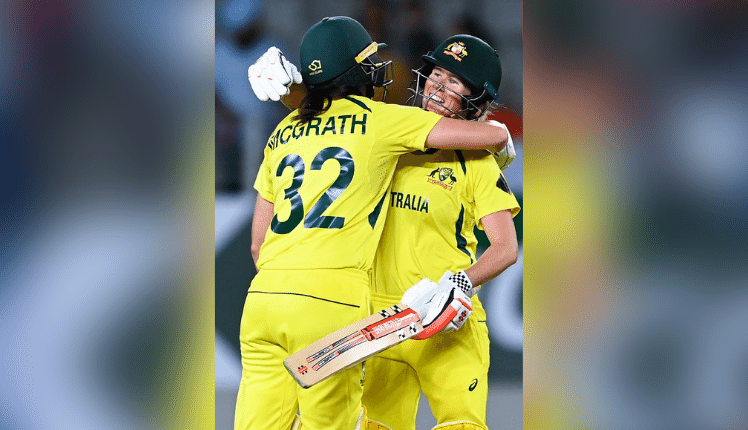 Australia Qualifies For Semi-Finals As Lanning, Healy Star Against India

Auckland: Special fifties from Alyssa Healy (72) and Meg Lanning (97) helped Australia make it five wins out of five in the ICC Women’s Cricket World Cup 2022 with a six-wicket victory over India in Auckland.

Chasing 278 for the win, the game went into the final over but Beth Mooney finished the game off in style as Australia became the first team to book a berth in the semi-finals of the ICC Women’s Cricket World Cup 2022.

With the win, Australia also broke the record for the highest successful run-chase in Women’s World Cup history, surpassing the one they set against Sri Lanka in the 2017 edition of the tournament.

Alyssa Healy, along with Rachael Haynes, took the game away from India with a brilliant 121-run opening stand. With wickets in hand, Lanning’s spectacular innings of 97 got Australia close to the finish line before Mooney took the team home in the final over.

Raj and Bhatia helped pace the innings through the middle overs by putting on 130 runs for the third wicket, before Kaur and Pooja Vastrakar (34 off 28 balls) put the finishing touches on the innings with some lofty late blows.

Teenage quick Darcie Brown – who helped reduce India to 28/2 by picking up both openers during an excellent opening spell – was the pick of the Australia bowlers with 3/30, while Alana King (2/52) and Jess Jonassen (1/40) made up for an unusually wayward Ellyse Perry (0/24 from three overs).

Brown had Smriti Mandhana (10) caught at slip by Meg Lanning in the fourth over, before Beth Mooney pulled down a contender for catch of the tournament when she held on to a difficult chance at gully to send Shafali Verma (12) packing.

Bhatia and Raj then combined to take the score from 28/2 to 158/2 without taking too many risks, and it looked like India were well on their way to putting up a big total.