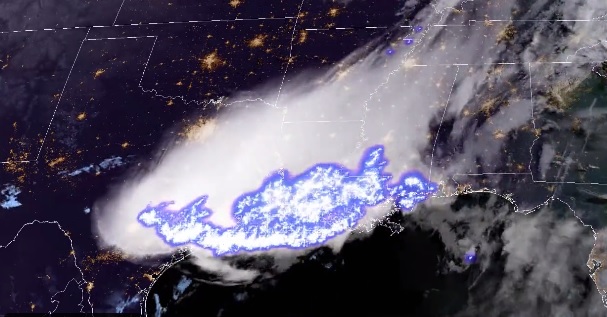 The United Nations Tuesday said that a single flash of lightning in the United States nearly two years ago cut across the sky for nearly 770 kilometres, setting a new world record.

The longest detected megaflash, measured in the southern US on April 29, 2020, stretched a full 768 kilometres, or 477.2 miles, across Mississippi, Louisiana and Texas.

In a statement, UN’s World Meteorological Organization (WMO) pointed out that it is equivalent to the distance between New York City and Columbus, Ohio, or between London and the German city of Hamburg.

That lightning bolt zig-zagged some 60 kilometres further than the previous record, set in southern Brazil on October 31, 2018.

The WMO’s committee of experts on weather and climate extremes also reported a new world record for the duration of a lightning flash.

WMO has verified 2 new world records for a ⚡️⚡️ #megaflash
Greatest duration of 17.1 seconds over #Uruguay and #Argentina
Longest distance of 768 km (477.2 miles) across southern #USA @NOAA imagery of US megaflash highlights advances in #satellites and detection technology pic.twitter.com/RazD75gqNM

A single flash that developed continuously through a thunderstorm over Uruguay and northern Argentina on June 18, 2020 lasted for 17.1 seconds—0.37 seconds longer than the previous record set on March 4, 2019, also in northern Argentina.

“These are extraordinary records from single lightning flash events,” Randall Cerveny, the WMO rapporteur of weather and climate extremes, said in the statement.