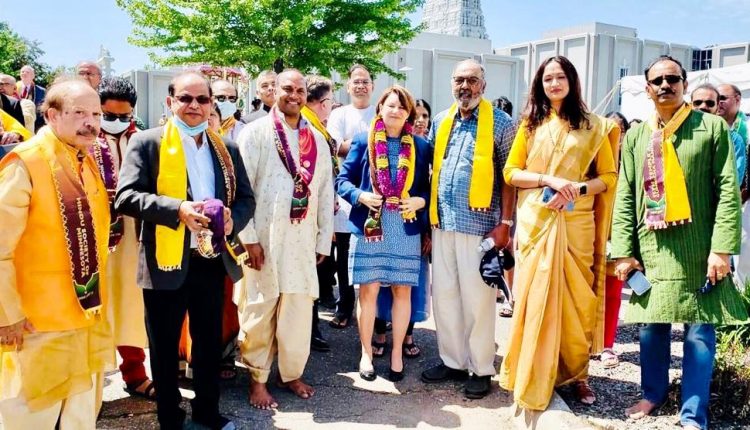 Minneapolis/Bhubaneswar: Notwithstanding the catastrophe created by the COVID-19 pandemic, the Hindu society of Minnesota (H.S.M.N) continues to be a beacon of light, declared U.S. Senator Amy Klobuchar. Inaugurating the second Gundicha Temple of the World after Puri at Maple Grove city, Mrs. Klobuchar profusely praised the spectacular contribution of HSMN in maintaining peace, harmony and prosperity in Minnesota.

Particularly she acknowledged the massive development measures being undertaken for the temple during the Chairmanship of Dr. Sitikantha Dash. These include construction of staff and priests quarters, availability of state of the art safety and security facilities, establishment of solar plant, Renovation of Gopuram, and opening of Shree Gundicha Temple, Senator Amy informed.

Participating in the Inaugural ceremony as Guest of Honour, Mayor Mark Steffenson, conveyed his greetings to the Executives and members of HSMN for the grand Inauguration of Shree Gundicha Temple and wishes further advancement of the Hindu Temple under the able and energetic stewardship of Dr. Sitikantha Dash.

Delivering the welcome address during the occasion, Chairman Dr. Sitikantha Dash, elaborated on the successful navigation of the Hindu Temple in spite of the serious danger and difficulties created by Corona crisis. The Temple management achieved this uncommon feat by cutting costs without terminating priests and staff, he added. Dr. Dash declared amidst thunderous applause that the Hindu Temple is taking special pride in making it possible to continue the regular religious rituals without a break. Dr. Dash conveyed sincere thanks to the priests, EC and TEC Teams, Trustees, Donors and Volunteers, and well-wishers for their solid support and unstinted cooperation and contributions.

Proposing the vote of thanks, President of HSMN, Pooja Bastodkar maintained that the committees headed by EC chairs could successfully beat the covid pandemic to retain the targeted records on New and proud categories. The virus has taught us how to reinvent quickly, focus on out-of-the-box thinking and adapt to rapidly changing circumstances, Smt Bastodkar mentioned bubbling with newfound confidences.

The Governor of Minnesota Tim Walz graced the Fifteenth Anniversary Celebration of the Hindu Temple as Chief Guest. Mr. Walz was accorded a rousing reception at the premises of the Temple by the Chairman of HSMN Dr. Dash and President Smt  Bastodkar. Then he was conducted to visit all the deities in the Temple. Later on, delivering his speech in a public gathering, Governor Walz thanked the main host, Dr. Dash, for inviting him to the largest Hindu Temple of North America. Mentioning the huge contribution being made by the Indian community in the furtherance of the Health, Education, and Human Welfare sectors of Minnesota, Governor Walz expressed his appreciation for HSMN. Senior Trustee Ram Gada introduced the Governor and other distinguished dignitaries present.

Governor Tim Walz, Mayor Mark Steffenson, and other Guests released a Souvenir containing the past, present and future projects and programmes of HSMN.  The Masterpiece Publication was compiled by the Editorial Board consisting of members like Sushumna Tandon, Ram Gada, Manoj Prabhu, Dr Sarat Mohapatra, Pooja Bastodkar, and Purna Gurram. This year’s outstanding Service Award was presented to Kanak Dutt by Mayor Mark Steffenson.

More than 500 community leaders attended the meeting at the Temple Auditorium. The evening of the Annual Day Celebration witnessed the presentation of scintillating Dance choreography entitled ‘Neel Kamal,’ coordinated by Sarita Patnaik and Sudipta Tripathy.

The Special Puja, Homo, and Purnahuti for the establishment of the new Gundicha Temple was conducted under the guidance of the main priest Murali Bhatter.

The major attraction of the Fifteenth Anniversary celebration was the hosting of a divine food festival entitled ‘Bharat Darshan’ for three days from 11th to 13th June under the mentorship of Kanak Dutt, Siddharth Priyadarshi, Shankarsan Das, and Padma Naidu.

Srimandir To Remain Closed For Public Till July 25: SJTA Chief