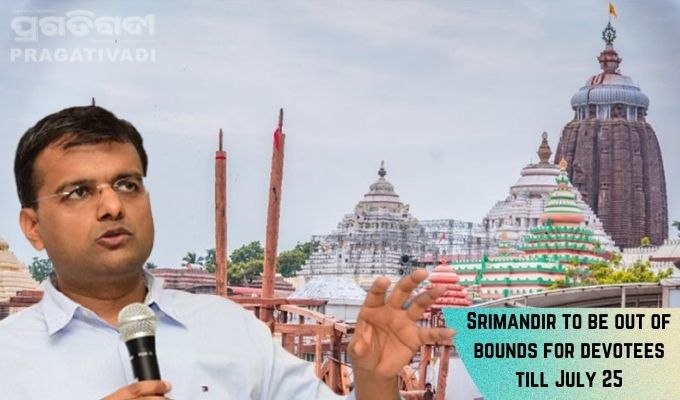 Srimandir To Remain Closed For Public Till July 25: SJTA Chief

Puri: In view of the surge of COVID-19 cases in Odisha, the authorities on Wednesday announced that the Puri Srimandir would remain out of bounds for the public till July 15.

The 12th-Century Shrine has been closed for the devotees since May 5 as a state-wide lockdown was imposed by the Odisha government, However, all the rituals are being conducted with a limited number of sevayats (servitors).

The decision was made by Shree Jagannath Temple Administration (SJTA) after a review meeting chaired by SJTA Chief Administrator Dr. Krishan Kumar this afternoon.

Speaking to media persons regarding the same, Dr. Kumar said,” The spread of COVID-19 among the servitors during these times will be detrimental to the observance of daily rituals and annual programmes such as ‘Chandan Yatra’, ‘Snana Yatra’ and ‘Rath Yatra’. Lord Jagannath’s Snana Purnima will be held sans devotees on June 24.”

“Like previous year, this year also devotees will be barred from participating in the annual sojourn of the Holy Trinity, which will only be held in Puri amid strict adherence to COVID-19 protocols. The decision to allow public darshan in Srimandir will be taken after Rath Yatra,” said the SJTA Chief Administrator.

COVID-19 +ve cases comes down to 372 in Bhubaneswar, active cases at 3K