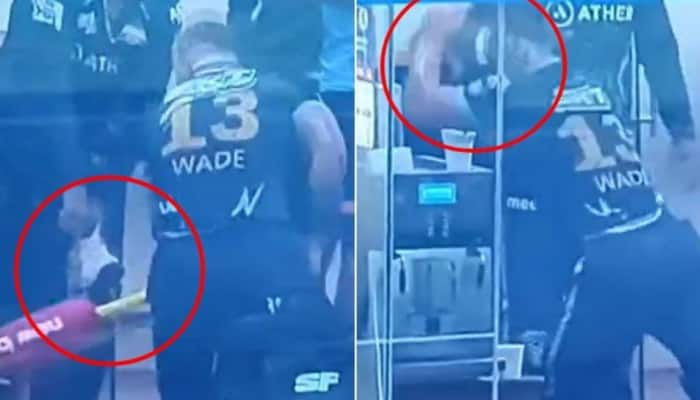 Mumbai: The Decision Review System (DRS) was under the scanner again when Matthew Wade’s review of a leg-before decision was turned down in the Indian Premier League match between Gujarat Titans and Royal Challengers Bangalore at Wankhede Stadium on Thursday.

Gujarat Titans’ batter Matthew Wade lost his cool after an umpiring decision did not go his way and he had to walk back to the dressing room.

Coming in to bat at No 3, Wade was made to work hard by RCB bowlers for his innings of 16 runs from 13 balls, that included 2 fours and 1 six.

He was going well but the second ball of the fifth over of the innings changed things for worse. Wade was trapped in front of the stumps off this Glenn Maxwell delivery. The on field umpire ruled it out and Wade immediately opted for DRS as he felt he had knicked it on to the pads. The ball definitely appeared to deflect off the bat to the naked eyes but UltraEdge did not show any spike as the ball passed the bat. On the evidence available, third umpire stuck with the onfield call but Wade lost his cool. He just could not believe and started yelling and screaming to the heavens as he walked back. He was seen shaking his head while walking back and was consoled by RCB icon Virat Kohli. After reaching the dressing room, Wade lost his cool in the dressing room and was spotted throwing his bat and helmet in anger.

This is not the first time that such a decision has been taken by the third umpire.

Earlier, Rohit Sharma was involved in a shocking and bizarre dismissal in the game vs KKR, as the third umpire gave his verdict in a hurry.

Three elephants die after being hit by train in Keonjhar