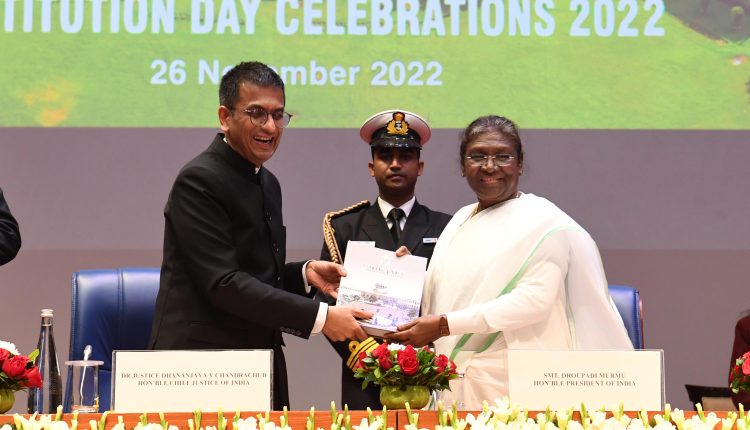 New Delhi: President Droupadi Murmu delivered the valedictory address at the Constitution Day Celebrations, being organised by the Supreme Court of India in New Delhi today.

Speaking on the occasion, the President said that we are commemorating today the adoption of the Constitution that has not only guided the journey of the Republic over the decades, but has also inspired several other nations in the drafting of their constitutions.

The President said that the Constituent Assembly was composed of elected members who represented all the regions and communities of the nation. They included stalwarts of our Freedom Movement. Thus, their debates and the document they prepared reflect the values that guided the struggle for Independence. They had their own dreams and ideas about the character of this nation, but they were united in their desire to see it freed of shackles. They all made great sacrifices to ensure that the coming generations would breathe the air of a free nation.

Highlighting the fact that the 389 members of the Constituent Assembly also included 15 women, the President said that when some of the leading nations in the West were still debating women’s rights, in India, women were participating in the framing of the Constitution. She said that women’s participation in public life since Independence has shown an upward trend, but there is no reason to be content. She said that she understands that Judiciary also strives to enhance gender balance.

The President said that the cornerstone of the Constitution is summed up in its Preamble. Its singular focus is on how to increase social good. Its entire edifice rests on justice, liberty, equality and fraternity. When we speak of justice, we understand it is an ideal and achieving it is not without obstacles. The onus is on all of us to make the process of seeking justice affordable to all. She appreciated the efforts made by the Judiciary in this direction.

The President said that the question of access often goes beyond cost matters. The Supreme Court of India and several other courts now make judgments available in a number of Indian languages. This praiseworthy gesture makes an average citizen a stakeholder in the process. She noted that the Supreme Court and several other courts have started live streaming their proceedings. She said that it would go a long way in making citizens effective stakeholders in the dispensation of justice.

The President said that the Constitution outlines a map for good governance. The most crucial feature in this is the doctrine of separation of functions and powers of the three organs of the State, namely, the executive, the legislature and the judiciary. It has been the hallmark of our Republic that the three organs have respected the boundaries set in place by the Constitution. Each of the three aims to serve the people. It is understandable that in the zeal to best serve the interests of citizens, one or the other of the three organs may be tempted to overstep. Yet, we can say with satisfaction and pride that the three have always attempted to keep the boundaries in mind while doing their best to function in the service of the people.

Towards the end of her speech, the President made impromptu observations about her own experience as the governor of Jharkhand in addressing the problems growing number of undertrial prisoners who were languishing in jails. She also recalled her days as political activist in Odisha to highlight that the excessive cost of litigation was a major impediment in delivery of justice. Appreciating instances of speedy delivery of justice, she urged the executive, judiciary and legislature to evolve an effective dispute resolution mechanism to mitigate the people’s plight.