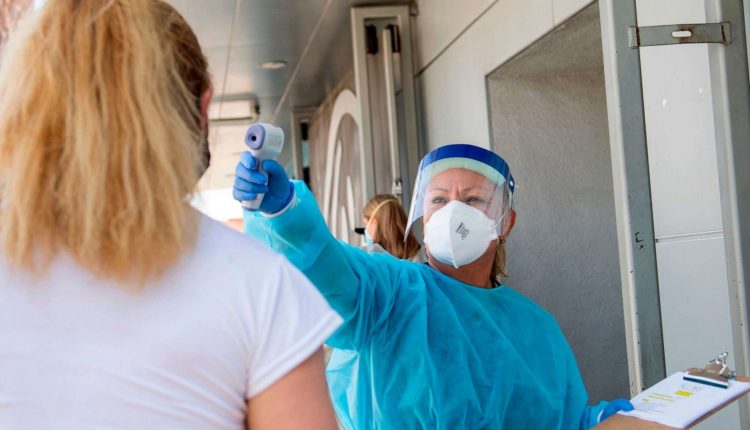 Beijing: China witnessed a record number of coronavirus cases for the third consecutive day on Saturday, with infections surpassing 35,000 despite large-scale lockdowns under the stringent Zero-COVID policy, triggering rare protests and clashes with the police.

China on Saturday reported over 34,900 cases, mostly that of the Omicron variant of the coronavirus, as officials went about imposing lockdowns, shutting people in their flats to cut the transmission chain.

China has reported six deaths – four in Beijing, one in Henan and another in Sichuan – this month, its first fatalities from the virus in six months.

China’s social media as well as Twitter postings by some of the Chinese showed videos of public protests from various places with people clashing with police and health officials in hazmat suits.

A large protest was witnessed in Urumqi, the capital of Xinjiang province, where 10 people were killed and nine injured in a fire two days ago at an apartment block that was sealed as part of the COVID lockdown.

Beijing continues to bear the brunt of the lockdown as cases hit a record high of over 2,600.

With its over 2.50 million people being virtually confined to their homes, the city wore a deserted look with courier services personnel busy delivering food and other essentials to households.

The zero-COVID policy firmly advocated by President Xi Jinping is fast turning out to be a major challenge in his third term, as officials have no clue to contain it other than ordering daily testing of millions of people and local lockdowns wherever cases have occurred.

Xi kicked off his record third term last month after being re-elected by the ruling Communist Party of China’s once-in-a-five-year Congress.

The surging cases bellied expectations that he would reconfigure the Zero-COVID policy considering that the rest of the world has come to terms with it, and more so with the Chinese economy taking a major battering due to the lockdowns.

According to a report by finance group Nomura, more than one-fifth of China’s total gross domestic product (GDP) is currently under lockdown.

The report also projected the amount of GDP affected by lockdowns would continue to rise in the coming weeks as China deals with its biggest Covid-19 surge since the start of the pandemic in central China’s Wuhan city in 2019.

One major factor contributing to China’s persistence with the Zero-COVID policy was its apprehension that the cases could adversely affect the unvaccinated old age population, observers say.

National Health Commission (NHC) data shows 85 per cent of the country’s over-60s were given primary immunisation, but only 67 per cent went on to get a booster dose.