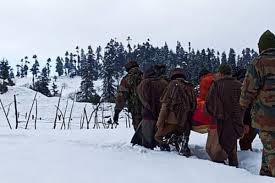 Kupwara: Army troops carried a pregnant woman to hospital in Kashmir braving blistering cold. The hospital was two km away.

The jawan had to wade through knee-dip snow to reach the hospital in Karalpura. Official sources said the woman gave birth to a baby boy at Karalpura hospital.

The Company Operating Base (COB) of Indian Army at Karalpura in Kupwara received a distress call from Manzoor Ahmed Sheikh of Pharkian village at 11:30 pm that his wife was groaning in labour pain.

Despite knee-dip snow, the troops swung into action and immediately carried the woman to hospital which was two km away from the spot.

The Kashmir valley is presently reeling under heavy snowfall. The weatherman has predicted dip in temperature in the coming days.