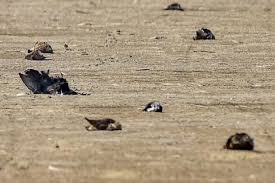 Jaipur: Rajasthan government has sounded alert for bird flu after the avian virus was detected in crow carcasses in Jhalawar and certain parts of the state.

There are reports that some regions of the capital Jaipur has also indicated the crow virus. This incident has surfaced while the country is trying to roll out coronavirus vaccine to counter the dreaded disease.

Reports said the Animal Husbandry Department has set up a state-level control room and sent experts for effective monitoring of the emerging situation.

Kunji Lal Meena , Principal Secretary, Animal Husbandry, said that the deaths due to bird flu were mainly reported among crows. Most of the cases are found in Kota and Jodhpur divisions, the official added.