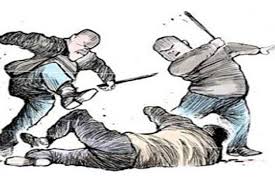 Balasore: A family in Taratri village under Berhampur police limits in Balasore district were allegedly attacked by miscreants.

According to available information, Miscreants allegedly thrashed the members of the family before setting their house on fire. The violence took place over the construction of the house on government land.

While the victims sustained injuries in the attack, one person has been admitted to Nilagiri hospital in critical condition, sources said.