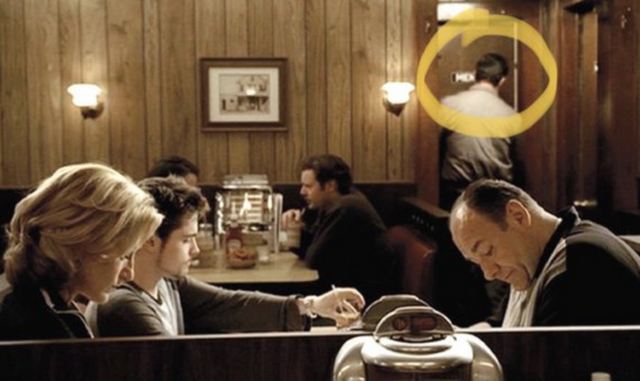 Tony Soprano as Schrodinger’s Cat – How the Sopranos Ends!

Tony, Carmela and Anthony Jr. are in a diner, hogging onion rings, while waiting for Meadow to turn up. “Best onion rings in the city, as far as I’m concerned,” declares T. You believe him, of course. Boss is always right. You have got to take his word on food. He was shown gobbling something or the other in almost every episode. Don Anthony is a connoisseur of classy females, and palatable food- the greedy and lust alpha male, veritably a bear. This also explains why the four Sopranos have taken the trouble of driving separately to some obscure shack between New York and Newark, rather than meeting up at Artie Bucco’s Nuvo Vesuvio, the favourite hangout of the mob.

A suspicious-looking guy enters the restaurant after the family has checked in. He seems loaded, his walk has that heavy gait. Tony does notice him lurking around. A couple of blacks have also entered the joint. Both Anthony Senior and Junior have had troubles with the blacks. There is a slight hint that these guys might be trigger-happy. A mobster’s got to be paranoid. There is always someone coming for him. The War has just gotten over. Or has it, really? Does peace interrupt wars, or is it the other way round. Phil Leotardo has been found and shot. John Sacrimony is no more. Syl is in coma, unlikely to recover. Bobby Baccalieri and Christopher Moltisanti are long dead. A truce has been reached.  Tony and Pauli have survived, or so they would like to believe. The family has returned home with bags and baggage. Pauli has agreed to shoulder more responsibility. New Jersey is swept with relief. Has Tony dropped his guard too soon? In waste management, you pay with your life for complacency.

There is nothing called lasting peace. If not the mob, there are the Feds. One of his associates, Carlo has flipped, and is set to testify. Tony is looking at indictment, maybe possible jail time. It never gets over, until it is finally over. Good days are hard to come by. When they do, life must be celebrated with family and friends.

The suspected button man is seen entering the wash room. This might be an allusion to the Godfather, in which Michael Corleone had similarly rushed to the bathroom midway to retrieve a hidden weapon, with which he had made short work of Sollozzo and Police Captain McCluskey. Meadow has finally managed to park her car, and is about to enter the joint. Journey’s Don’t Stop Believing plays in the background. Tony takes a bite of the onion ring, but looks mildly surprised. The screen CUTS TO BLACK.  You fiddle your remote, and mutter WHAT THE FUCK! That’s it? David Chase has pulled a fast one. The Sopranos have exited the screen. You do not know what has happened, if anything has happened, that is.

The final moments of Mad Men showed Don Draper meditating at a retreat in California, suggesting that he had broken off from the tedium of corporate life, womanizing and consumerist pursuits. Yet nothing was clearly spelt out. How I Met Your Mother had to release an alternate ending to mollify the fans. Game of Thrones goofed up with their hurried and confusing climax. But Sopranos’ black screen leaves you truly flummoxed. With due respect, the likely button man is not Mikey, and is most probably already carrying the piece. In fact, the rush towards the bathroom indicates flushing down of courage. Very likely, Tony’s exhibition of mild surprise is at the sight of his daughter, his expressions being enhanced by the good taste of onion rings.

David Chase gave the Sopranos a speculative ending, which cannot be considered conventional closure. Yet it could be interpreted to mean that business would go on, and Tony shall live with his paranoia, persistent dangers and legal troubles, not to mention his love for food, family and females. Quite later, David Chase tried to influence the debate by saying this –

“Because the scene I had in my mind was not that scene. Nor did I think of cutting to black. I had a scene in which Tony comes back from a meeting in New York in his car. At the beginning of every show, he came from New York into New Jersey, and the last scene could be him coming from New Jersey back into New York for a meeting at which he was going to be killed. Yeah. But I think I had this notion—I was driving on Ocean Park Boulevard near the airport and I saw a little restaurant. It was kind of like a shack that served breakfast. And for some reason I thought, “Tony should get it in a place like that.” Why? I don’t know. That was, like, two years before.”

Chase admitted to being bothered by the public fixation on Tony’s fate, since so much was going on in the world at that time, like the war in Iraq, and bombings in London.  As if it is a zero –sum game. That was truly an odd line to take. Despite the creator’s hurt liberal soul, and ‘assumed prerogatives’, we have to consider Tony Soprano as a typical Schrondinger’s Cat – both alive and dead at the same time, until the state has been observed. Forget about whether the shot found the target, we do not even know if there was a fire-arm, or even a shooter present in the shack in the first place. Tony had already enjoyed many lives. He had evaded arrest when his cousin Tony Blundetto had been nabbed for carjacking, had survived a gunshot by his Uncle Junior, and had come out of a potentially grievous car accident. It can be argued that many of his nine lives were still remaining at the end of S06E21.

The creator, the writer or the maker of a fictional piece (film, series or book) cannot provide a post-facto explanation, justification or conclusion to his work, especially the climax, unless he has left behind palpable, identifiable clues to that effect. Doing otherwise would be intellectual dishonesty. Once a film is shot or book is written and released, the creator no longer has the sole right upon its interpretation or the fate of its characters. Sometimes the story and the characters assume a life of their own. It is for the audience, readers and fans to speculate, which might well be a never-ending quest. That is the fate of that art, David Chase can go take a walk.

Wanna Enjoy Snow In India? Add These Destinations To Your Travel List