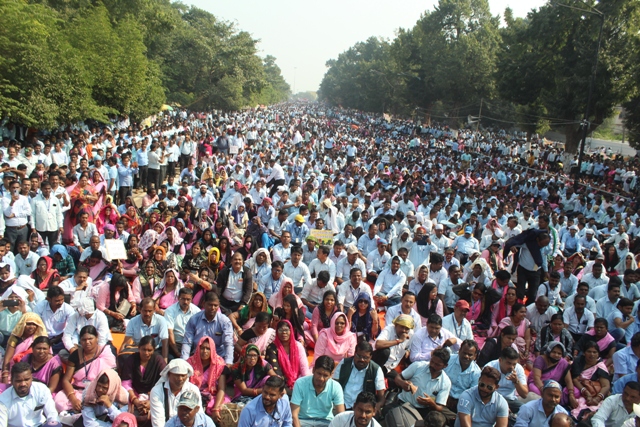 Bhubaneswar: The primary teachers who have been on dharna near the Odisha Assembly demanding regularization of jobs and implementation of pension system, have threatened to intensify the agitation in coming days after the discussion with the government yielded no fruits on Tuesday.

The teachers shared their decision with media after meeting with chief secretary and discussed the issues with him.

“Though the chief secretary assured to resolve our issues, but he didn’t fix any particular date. There is no clarity on his assurance which irked the striking teachers,” said Rajesh Mohanty, Teachers’ Association president.

Though the government had declared to abolish contractual appointment and regularize the jobs of teachers who had joined after 2004, there is no transparency in the government notification, they alleged.

On the other hand, the teachers’ issued today stalled the Assembly proceedings for the third consecutive day with Opposition targeting the government for its callous approach.

The Opposition members said that teachers have spent day and night under open sky during a chilly condition. But, the government has acted a mute spectator. If the teachers’ issues are not resolved, there is no need to run the Assembly, Congress MLA Tara Prasad Bahinipati said.

BJP’s Mohan Majhi also echoed similar views. He said the School and Mass Education Minister went missing from the State Capital when lakhs of teachers have sat on dharna pressing for their demands.