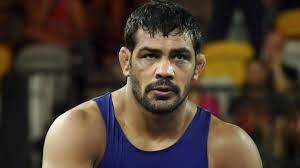 New Delhi: Wrestler Sushil Kumar, who is reportedly lodged in Tihar jail in connection with the Chhatrasal Stadium brawl, has demanded television inside the jail to remain updated about wrestling matches.

Kumar was arrested along with co-accused Ajay Kumar on May 23 from outer Delhi’s Mundka area.

He and his associates allegedly assaulted wrestler Sagar Dhankar and two of his friends Sonu and Amit Kumar on the intervening night of May 4 and 5 over a property dispute. Dhankar, 23, succumbed to injuries later.

A senior jail official said Kumar has made the request through his advocate.

He has requested for a television set so that he would get updates about wrestling matches, the official said.

Earlier, a Delhi court extended the judicial custody of Kumar till July 9. He has been shifted to Tihar jail number 2 from Mandoli jail where he was earlier lodged.

Police said 12 accused, including Kumar, have so far been arrested in connection with the Chhatrasal Stadium brawl case.