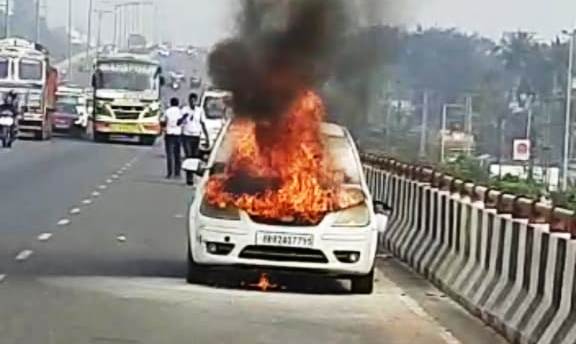 Bhubaneswar: Three persons had a narrow escape when the car they were travelling in caught fire on a flyover near Fire Station Chhak in Bhubaneswar, today.

Reportedly, the incident occurred when the car was en route to a service garage situated in Khandagiri from Master Canteen while the vehicle was in motion. Meanwhile, the driver noticed the smoke emanating from the vehicle’s bonnet.

Following this, after the occupants alighted, the driver parked the vehicle on the roadside and ran to a safe place.

Thereafter, a fire broke out in the car following which the ill-fated four-wheeler was completely damaged.

On receiving information, fire personnel reached the spot and doused the flames. It is suspected to be a short circuit. However, the reason behind the mishap is yet to be ascertained.

19-YO Girl Raped In Mayurbhanj, Minor Among 2 Held