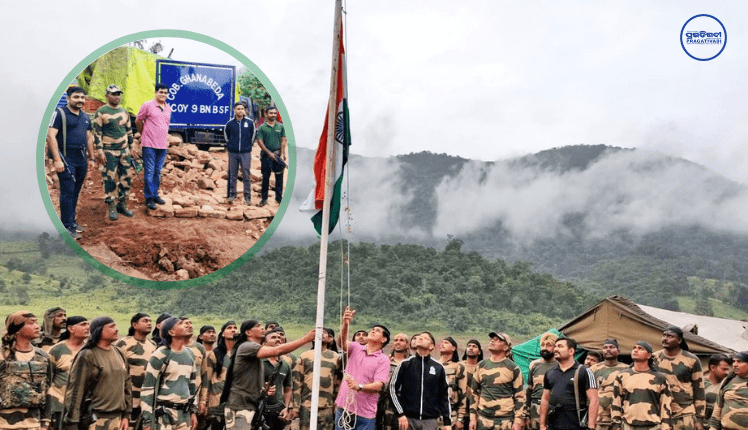 New BSF Camp Comes Up At Ghanbeda In Swabhiman Anchal

Malkangiri/Chitrakonda: In yet another milestone for Odisha Police in Swabhiman Anchal, a new BSF Camp has come up at Ghanbeda under Panasput panchayat in Malkangiri district’s Chitrakonda area.

The camp has been set up jointly by SOG, DVF and BSF. Scores of local villagers also welcomed the establishment of the BSF Camp

Chief Minister Naveen Patnaik also congratulated Odisha Police and Border Security Force on setting up a camp at Ghanbeda and further expanding presence in the Swabhiman Anchal, a Maoist stronghold. “The expansion of presence in the left-wing heartland will further reassure people and facilitate speedy development in the region,” he said in a tweet.

Congratulate @odisha_police and @BSFODISHA on setting up a camp at Ghanbeda, further expanding presence in #SwabhimanAnchal, a Maoist stronghold. The expansion of presence in the left wing heartland will further reassure people and facilitate speedy development in the region. https://t.co/QA86vjlZoC

Despite the torrential downpours, the camp’s perimeter was identified on the first day in the presence of BSF DIG Sanjay Kumar Singh, Malkangiri SP Prahlad Sai Meena, BSF Commander RS ​​Minj, Deputy Commandant AK Anthony, Chitrakonda SDPO Anshuman Dwivedi. Besides, the area around the camp was also secured by a fence.

With an aim to spearhead the development work and suppress the Maoist menace in the region, the BSF camp has been set up at Ghanbedha. Known as a Maoist stronghold for its remote and hilly terrain, the situation in the area is rapidly changing after the completion of Gurupriya Setu.

With the construction of roads to villages, the government, the Odisha police and the district administration have launched various development programs in the area, including education and healthcare. People are slowly getting involved in government programs, including the administration. The BSF and police have been working hard to crackdown on Maoists.

Elections have not been held in all these areas for the last ten years due to the presence of the Maoists. With the panchayat election looming, the police are planning to establish more camps in the region.