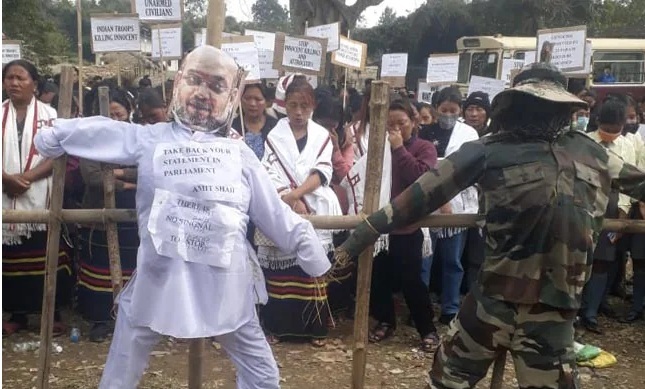 Kohima: A botched Army operation in Nagaland’s Mon district a week ago and the subsequent clashes between security personnel and angry locals has claimed the lives of 14 civilians and a soldier.

Nagaland remained on the boil after thousands of furious residents carried out massive protests in Mon today demanding an apology from Home Minister Amit Shah for his “false” and “fabricated” statement on the incident in Parliament this week.

The  agitators burned effigy of the Home Minister to underline the extent of their anger – both against Shah and his “incorrect statement”, and also against the central government over the continued imposition of Armed Forces Special Powers Act (AFSPA).

The protestors who are mostly residents of Oting village, led by Konyak Union- an apex body of tribes, have demanded an immediate apology from Amit Shah and the withdrawal of his statement from the Parliament’s records.

Stated that they are asking for justice not sympathy, the union’s Vice President Honang Konyak said: “Twisting of truth is unfortunate… Home Minister Amit Shah’s statement in Parliament (is) confusing the world with wrong information. He should immediately withdraw… we demand his apology.”

“We will not rest until justice is delivered to those 14 Konyak youth who were killed,” he added.

In a perfunctory statement to both Houses of Parliament on Monday, Amit Shah said the Army unit had only opened fire because the truck carrying the villagers accelerated away when ordered to stop. The Army unit, suspecting insurgents were in the vehicle, opened fire, he added.

Anger over the incident is rising in Nagaland, where people have frequently accused security forces of wrongly targeting innocent locals in counterinsurgency operations against rebel groups under the Armed Forces Special Powers Act (AFSPA).