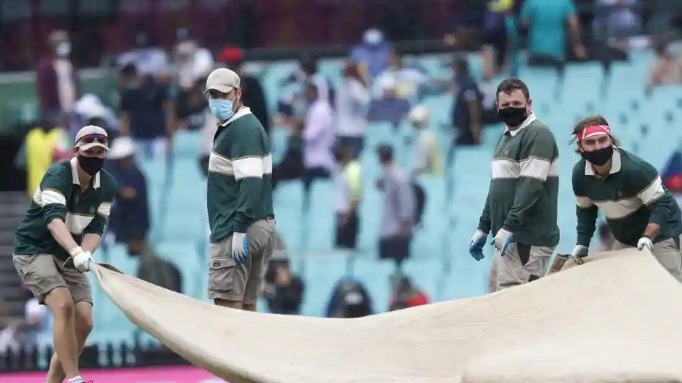 Sydney: Australia won the toss here at the Sydney Cricket Ground and opted to bat first. Will Pucovski for Australia and Navdeep Saini for India are making their Test debuts today.

The rain has stopped at the Sydney Cricket Ground and the sun is out. After an early inspection, the umpires have opted for another inspection shortly. Early lunch was taken on Day 1 of the Sydney Test. Just 7.1 overs possible in the first session in which Australia scored 21 runs and lost the wicket of David Warner.

Rain at the Sydney Cricket Ground forced the players to go off the field in 8th over of the third Test. This happened after Mohammed Siraj dismissed Warner for 5.

India will aim to take the lead in the four-match Test series for the first time. For India, a fit-again Rohit Sharma will replace struggling opener Mayank Agarwal and pacer Navdeep Saini will make his Test debut in the Sydney Test.

Rohit returns after recovering from a hamstring injury which kept him out of the limited-overs series in Australia as well as the first two Tests in Adelaide and Melbourne. India have also lost the services of frontline pacers Mohammed Shami and Umesh Yadav through injuries since levelling the series 1-1 in Melbourne.

US Capitol locked down as Pro-Trump Mob Clashes With Police, 1 Dead: Reports