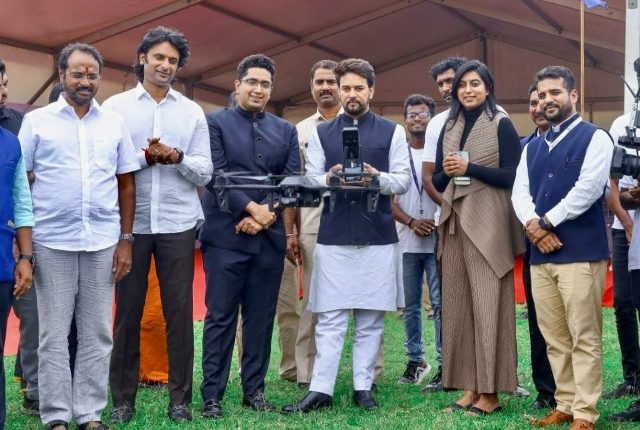 Chennai: India will become a hub of drone technology and India will require at least 1 lakh drone pilots by next year, said Union Information and Broadcasting Minister Anurag Singh Thakur.

He was addressing the gathering after flagging of the ‘Drone Yatra 2.0’, in Chennai today

Technology is truly transforming the world at a rapid rate and it has never been more relevant than now as its applications are solving some of the most pressing problems on the planet, said the Minister.

He said “Prime Minister Modi once remarked that ‘India has a billion solutions to a million problems.’ As the country of a billion plus people, India is increasingly leveraging technology to stay ahead of the curve”.

Detailing the advancements in drone technology in India, he said that during the Beating Retreat, the entire nation was mesmerised by the spectacular display of 1000 ‘Made in India’ drones by Indian start-up ‘Botlab Dynamics’ led by an IIT alumni.

As a part of the SWAMITVA scheme (Survey of villages and mapping with improvised technology in village areas), the survey of the land and houses are being prepared through drones in the villages, he added. Drones are increasingly being used to sprinkle pesticides and nano fertilizers in the fields in rural villages.

He said that recently, the Ministry of Civil Aviation (MoCA) and Directorate General of Civil Aviation (DGCA) had granted conditional exemption to the Board of Control for Cricket in India (BCCI) for the deployment of drones for live aerial cinematography of the India Cricket Season in 2021.

He remarked that as part of the “Kisan Drone Yatra”, inaugurated by PM Narendra Modi 100 Kisan Drones were sent to villages across the country to spray pesticides. He quoted the PM Modi’s remark that, “Kisan Drone is now the beginning of a new age revolution in this direction.”

Sambalpur: Youth Stages His Own Kidnapping To Extract Money From Family, Held