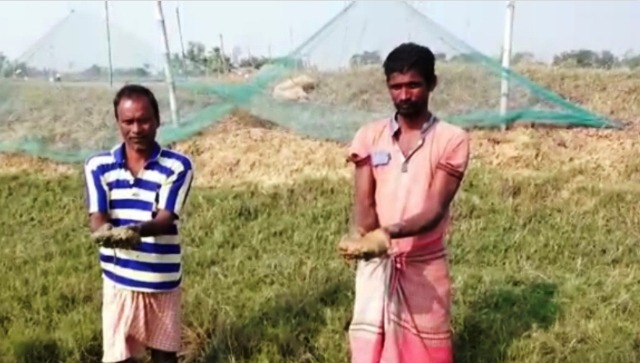 Bhadrak: The entire coastline in Bhadrak district is in the grip of prawn mafia. If reports are to be believed, the adverse effect of illegal prawn gherries has destroyed acres of paddy crops in the region.

Farmers of the district have alleged that hundreds of acres of farmland have lost their productivity as the prawn mafia have captured their land to carry on their farming.

Bishnu Mahalik, a farmer of Baligaon in Chandbali NAC, alleged that illegal prawn farming has destroyed his four-acre land.  He said seepage of saline water from the prawn gherries surrounding his farmland has become suicidal for him.

Similarly, Sasank Maiti, belonging to Charadia village, said that saline water laced with chemicals used in the nearby prawn gherries has devastated the productivity. Maiti alleged he has invested a lot by purchasing manure and high yielding paddy, but to no avail.

When contacted, Bhadrak Sub-Collector assured that the matter is of great concern and action will be taken after proper investigation.

On the other hand, some prominent persons said that they will undertake a padayatra to State Capital to highlight their grievances and urge the Chief Minister of Odisha to do the needful.