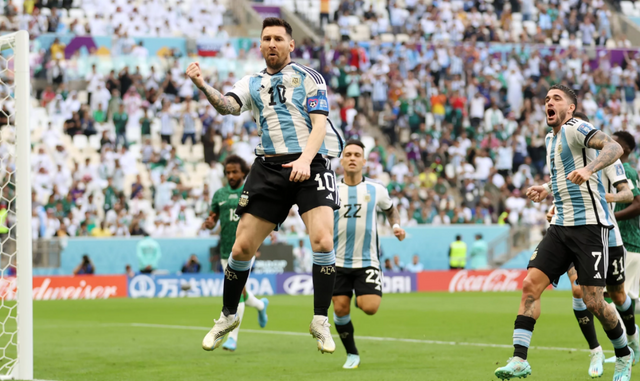 Lionel Messi, playing his fifth and final FIFA World Cup, gave Argentina a phenomenal start by scoring a goal inside first 10 minutes of the match but Saleh Al-Shehri scored the equaliser in 48th minute and then Salem Aldawsari doubled his team’s in 53rd minute to seal a stunning win for his side.

Reacting to Argentina’s shock defeat, football legend Messi said his team isn’t going to give up after ‘heavy blow’ and will try to get a win over Mexico in their next Group C match.

“It’s a very heavy blow, a defeat that hurts, but we must continue to have confidence in ourselves,” Messi said after Argentina’s 2-1 loss.  “This group is not going to give up. We will try to beat Mexico,” he added.

Speaking via Argentina’s official Twitter account, Messi said: “We knew that Arabia is a team with good players, that moves the ball well and that advances the line a lot. We work on it, but we speed up a bit.

“There are no excuses. We are going to be more united than ever. This group is strong and they have shown it. It is a situation that we did not have to go through in a long time.

“Now we have to show that this is a real group. It’s a very hard blow for everyone, we didn’t expect to start like this.

“Things happen for a reason. We have to prepare for what’s coming, we have to win or win and it depends on us”.

Argentina, the Copa de America champions, winning the World Cup 2022 trophy would be a perfect tribute to one of the best footballers of all time – Lionel Messi, who is playing his last World Cup. The experience of ‘GOAT’ Messi, Immy Martínez and Rodrigo de Pal adds to the strength of coach Leon Scaloni’s Argentina and they for sure have a solid chance of bagging the prestigious WC trophy at Qatar.

Odisha Govt Gets Go-Ahead For Development Of Rasgovindpur Airstrip