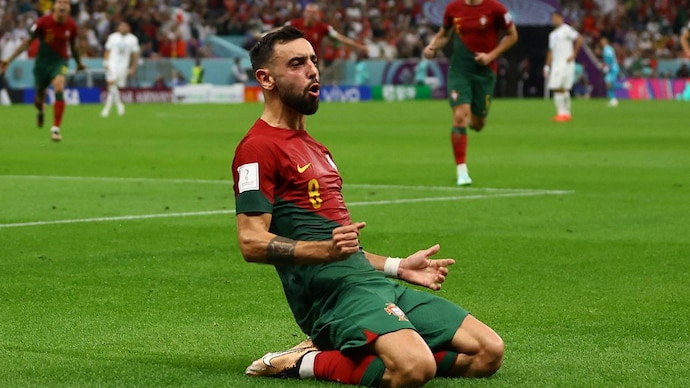 Qatar: Midfielder Bruno Fernandes scored a brace to help Portugal beat Uruguay 2-0 in their second Group H game of the FIFA World Cup 2022 on Tuesday. The victory secured Portugal’s place in the Round of 16 with a game in hand, becoming only the third team after France and Brazil to qualify for the knockout stage.

Interestingly, after two rounds of group stage matches, only three teams have secured the last 16 spots. And the final round of group matches will decide the remaining 13 spots from the 27 teams still in the contention. Hosts Qatar and Canada are the only teams to crash out of the tournament so far.

The Europeans had dominated possession before Fernandes’ 54th minute cross floated past Uruguayan goalkeeper Sergio Rochet, who was rooted to the spot as Cristiano Ronaldo rose to head the ball and initially celebrated the goal as his.

Fernandes then sealed the game with his second goal through a penalty, which he had earned himself in stoppage time.

Portugal’s second win in two games put them top of Group H on six points and heading into the last 16. Uruguay, third on one point, must beat Ghana in their final group game to have a chance of progressing.

FIFA World Cup: Brazil advance to round of 16 as Casemiro’s goal edges Switzerland

WHO renames monkeypox as ‘mpox’ to avoid racist stereotypes and stigmatisation