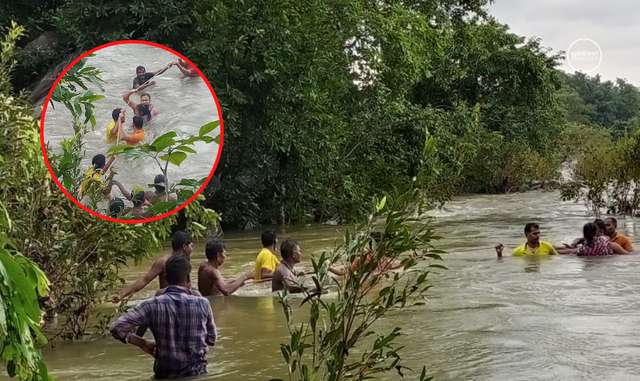 Deogarh: As many as 10 people including some children and women were trapped in the middle of Gohira river near Jamunali village under the Tileibani block of Deogarh district after a sudden rise in water level.

According to reports, some people hailing from Jamunali village were roaming in river bed taking selfies when the water level suddenly increased due to the release of water from the nearby dam at 9 am today. Even though the dam authorities had sounded the alarm, the village is about 5 kms away from the dam and the villagers did not get any prior warning. As a result, 10 of them got stuck in the middle of the river by holding on to bushes and branches of trees.

Some fellow villagers heard the stranded persons screaming for help and immediately informed the Reamal fire brigade. Soon the firemen reached the spot and carried out a rescue operation. After hours of ordeal, the firemen managed to safely rescue six people from the river while four others managed to swim to the shores. Fortunately, no loss of life was reported in the incident.

On the other hand, after learning of the incident, the dam authorities immediately closed the gates. Some officials of the dam and fire officials present at the spot conducted rescue operations and assessed the situation.

When asked, Gohira Dam SDO Hrushikesh Bhoi said that the gates were opened with a siren and a notice, but after learning about the incident, the gates were closed immediately.

Reamal fire department officer Prafulla Biswal said that he reached the spot after receiving the news and rescued 6 people. Mr Biswal said that despite the fact that it was raining during the rescue and the water flow was steep, the staff rescued everyone safely averting a major tragedy and saving precious lives.