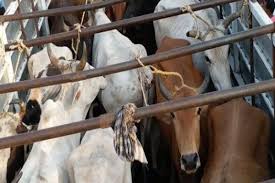 Later, on being informed, police rushed to the spot and rescued the cattle. Police also seized the pick-up van and detained the driver of the vehicle.