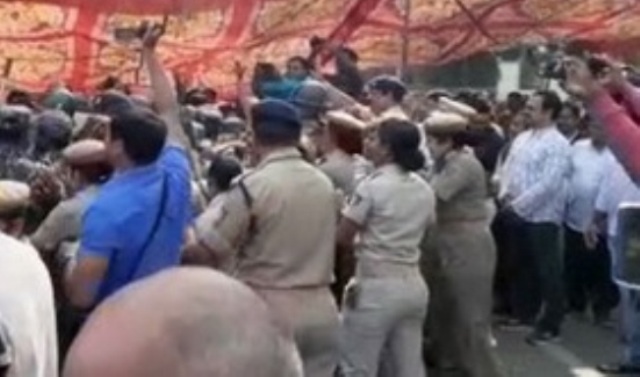 Sambalpur: Tension ran high at Kacheri Chhak in the city on Wednesday when lawyers who have been on a cease-work strike demanding permanent High Court Bench, tussled with police as the latter attempted to evict them from the protest venue as per the order of the Supreme Court.

The police initially discussed with the lawyers to evict the place as the Supreme Court had ordered to resume court work. The advocates, however, remained adamant on their decision forcing police to root out the make-shift tent house which led to a face-off between the two groups.

The tussle lasted for quite some times. Due to heavy protests, judges coming to attend the court work didn’t enter the campus and had to return.

As tension prevailed there, adequate security forces have been deployed to maintain law and order.

The long-standing agitation led to the disruption of court activities which had drawn Supreme Court’s ire. The apex court had recently expressed displeasure over the lawyers’ strike.

The SC had directed the lawyers to resume works failing which the Bar Council of India would suspend their licence. It had also directed the police to ensure security for the judicial officers, willing bar members and litigants.

The apex court was hearing an application filed by the registrar general of the Orissa High Court which has said that abstention of work by members of the bar associations in several districts has seriously hampered the judicial work in the subordinate courts of the state.

It had on November 14 asked the agitating members of the bar associations to resume work by November 16.

Despite its observations on November 14, the agitation and picketing continued in the district. Later, the top court directed the BCI to suspend protesting lawyers’ license, if needed.

“We would expect the BCI to take appropriate action against members of the different bar associations and logically, we would expect their licences to be suspended at least till the work is resumed,” the SC bench had said.

The apex court had said it expects the police to provide full proof arrangements for ingress and egress of the judicial officers, willing members of the bar and also the litigants.

It said appropriate steps, including preventive arrest or otherwise, as required may be taken by the administration.