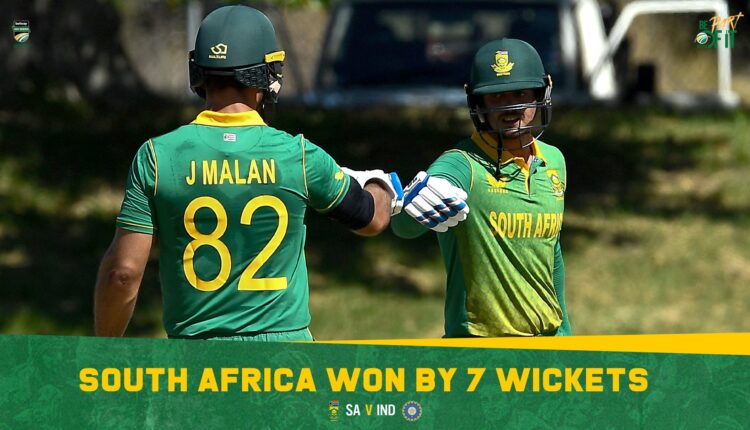 Paarl: South Africa beat India by 7 wickets and with this, the visitors are set to return home empty-handed. While India let slip of early advantage to go down 2-1 in the Test series, the second ODI lose at the Boland Park in Paarl closed all hopes of the Men in Blue.

In the chase of 288, Proteas openers Quinton de Kock and Janneman Malan added 132 runs for the first wicket and later Rassie van der Dussen and Aiden Makram added 74 runs for the fourth wicket that guided South Africa to victory.

After Rishabh Pant missed a stumping opportunity against de Kock in R Ashwin’s over in the first powerplay, South Africa hardly looked in trouble as they cruised to the target on a used pitch that KL Rahul thought would slow down in the 2nd innings.

Jasprit Bumrah, Yuzvendra Chahal and Shardul Thakur picked one wicket each for India. Spinners R Ashwin and Yuzvendra Chahal struggled to strike in the middle-overs once again as KL Rahul’s men failed to putt any kind of pressure on the South Africa batters.

Earlier, visitors posted 287/6 in 50 overs with half-centuries from Rishabh Pant and KL Rahul. Pant and Rahul added 115 runs for the third wicket which was the defining partnership of the Indian batting.

Rahul also added 63 runs for the first wicket with Shikhar Dhawan. In the end, there was a good 48-run partnership between Ravichandran Ashwin and Shardul Thakur in the last seven overs.