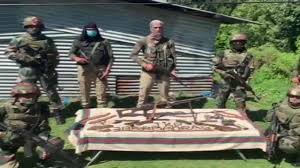 New Delhi: Jammu and Kashmir Police and the Indian Army in a joint operation busted one hideout of terrorist in Anantnag forest in the Valley on Sunday.

A huge cache of arms and ammunitions were recovered by the police from the site. This incident has occurred after the arrest of the conspirator of Krishna Dhaba attack.

Security deployment at all vital locations in the region has been increased, according to Inspector General of Police, Kashmir.

Police sources said two LeT Ultras were nabbed by security forces on Friday and incriminating documents were recovered from their possession in Bandipora district.