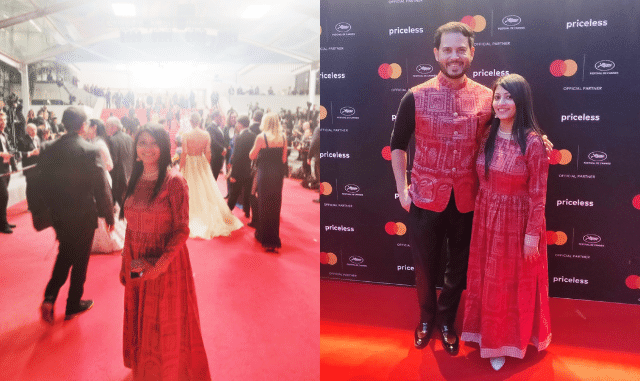 New Delhi: Internationally acclaimed filmmaker and promoter from Odisha, who is visiting Cannes film festival these days, walks the prestigious Cannes Red Carpet with his wife Donna in Sambalpuri attire. Jitendra himself designed and tailor-made both the Sambalpuri silk outfits for this special occasion.

Cannes Red Carpet is considered to be one of the most high-status and glamorous stages the whole world look up to and this was a rare opportunity to showcase the beauty of Odisha’s Sambalpuri handloom to the world. Audience from across the world appreciated the vibrant color, distinct design and texture of the silk.

The couple was invited to the Red Carpet show at the Grand Theatre Lumiere, Festival De Cannes during the World Premiere of Polish – Italian film EO by Jerzy Skolimowski that is in the competition section of the festival this year.

“This is indeed a great honor to be invited for foreign film premiere at Cannes, that to a film in main competition section of the festival, but it is a proud, happy and emotional moment for both of us to wear our own handloom Sambalpuri for the Red Carpet. I have walked Cannes Red Carpet several times in Tuxedo but there is certainly a magic touch in our Sambalpuri attire; I feel more confident and optimistic when I wear it, I feel like my entire family from Odisha, India is walking with me. In 2019 also I had spotted a Sambalpuri Jacket on Cannes Red Carpet,” said Jitendra. 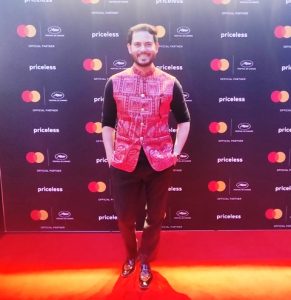 Born in Titilagarh, Odisha, Jitendra Mishra has been trying to promote the art, culture and cinema from Odisha and India at international forums like this. He is one of the few Indian film producers and promoters who have been able to create a benchmark in ‘Alternative methods of Film Production, Distribution and Promotion’ at international level. Committed towards meaningful cinema, Jitendra has already been associated with the production, distribution and promotion of more than 110 films in different categories and various capacities all together. Many of them have got worldwide acclamation and recognition. The Last Color, Buried Seeds, Desires of the Heart and Human Oak are few recent films among others.  Awarded with several national and international accolades, Jitendra has been the festival director of the unique film festival and forum SIFFCY an initiative of India’s leading development organization Smile Foundation. Currently Jitendra is the elected president of one of the world’s largest and oldest global network of media professionals CIFEJ that was formed under the auspices of UNESCO in 1955, Jitendra has been representing SIFFCY at CIFEJ since beginning. Jitendra has been a member of the Cannes Producers Network and also been invited as Jury to more than 40 different international film festivals and forums.