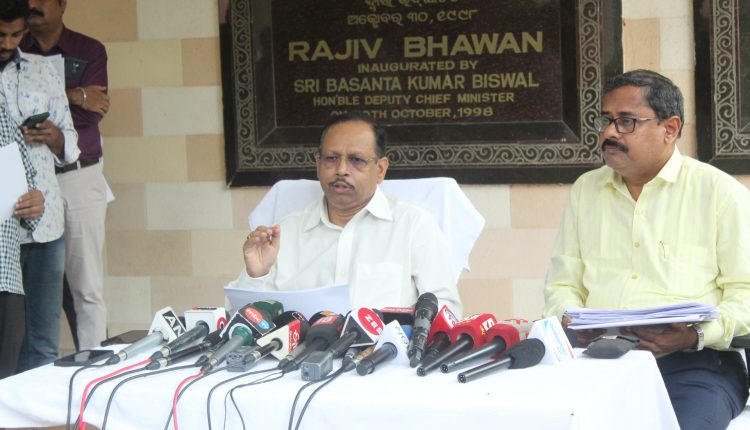 Bhubaneswar: Odisha Special Relief Commissioner (SRC) Pradeep Jena on Friday reviewed the flood situation in the state and said that now 20 gates have been opened in Hirakud Dam to discharge excess floodwater. “The water level has come down to 622ft and is at 621.93 ft now. The current inflow is 3.23lakh cusecs while the outflow is 4.10 lakh cusecs. The water level is expected to reach around 620.5 feet by Saturday morning,” he said.

“The water flow near Munduli is 9.48 lakh cusecs and the water level near is decreasing very slowly due to rains,” said SRC Pradeep Jena while briefing about the flood situation. He added that due to rainfall in various parts of the state, it is expected that the water level will rise in the lower catchment of the Hirakud and therefore it has been decided to close 4 more gates of the reservoir.

While the water level has decreased in the lower catchment of Mundali, there are no reports of any embankment breach. However, many villages are still marooned as the floodwater is yet to recede, he added.

Further, the Odisha SRC informed that about 2 lakh 77 thousand 995 people have been affected so far by this heavy flood. About 2 lakh 43 thousand 343 have been supplied relief till yesterday. Besides, 159 medical camps have been set up and 110 mobile health teams are on the move while there have been 5 snake bite cases.

Jena added that around 10,000 domestic animals have been treated and  5 lakh 14 thousand 488 vaccines have been given. While 231 metric tons of fodder have been provided to 7 affected districts, there will be no problems in the distribution of fodder.

Meanwhile, cooked food is being served to the affected people. As per Chief Minister’s announcement, relief will be given for 15 days in 5 districts and for 7 days in the other 5 districts affected by floods.