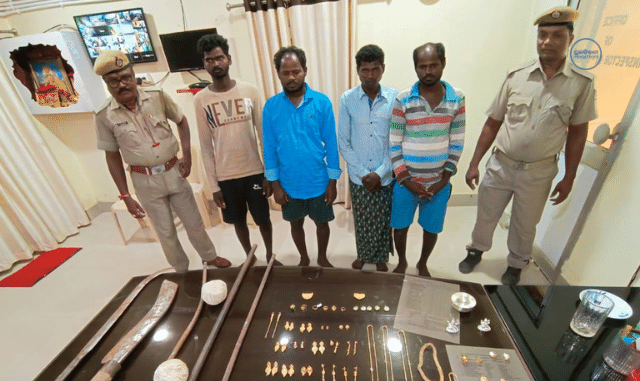 Golanthara: Police foiled a dacoity bid at a fuel filling station by apprehending four operatives of a looters’ gang at the Kalinga Nagar area in Ganjam district.

On the orders of Ganjam SP, Gopalpur police, with the help of Sadar SDPO Mr Mohapatra, were conducting blocking near Pathara village. Meanwhile, they received a tip-off that the operatives of a looters’ gang had assembled near the fuel filling station and swung into action.

On seeing the police, some miscreants managed to escape and the cops apprehend four operatives of the gang. During interrogation, the arrested persons confessed that they had been involved in several thefts and robberies.

Police also traced and recovered a cache of ornaments sold and hidden by the dacoity gang at some places. The cops recovered about 235 grams of gold jewellery, 60 grams of silver jewellery and some sharp weapons during the search.

While the four arrested accused have been forwarded to the court today, efforts are underway to trace and arrest the other operative of the dacoity gang who are on the run, the police official added.